Associations of Baseline and Longitudinal Uromodulin With ESKD and Mortality: Results From the AASK Trial

Associations of Baseline and Longitudinal Uromodulin With ESKD and Mortality: Results From the AASK Trial

Uromodulin (UMOD), the most abundant protein found in the urine of healthy persons, is produced exclusively by the kidney and has emerged as a promising biomarker of tubule health.

We evaluated associations of serum UMOD levels at baseline and change in UMOD over time with subsequent risk of incident ESKD and mortality among African American Study of Kidney Disease and Hypertension (AASK) trial participants. UMOD levels were measured from stored samples from the 0, 12, and 24-month visits. Covariates included baseline age, sex, systolic blood pressure, smoking, GFR, proteinuria, and randomized treatment groups. In secondary analysis, we evaluated whether randomized blood pressure goal or drug were associated with UMOD slopes.

Among African American adults with CKD and hypertension, higher UMOD levels at baseline and greater increases in UMOD over time were associated with lower risk of subsequent ESKD. 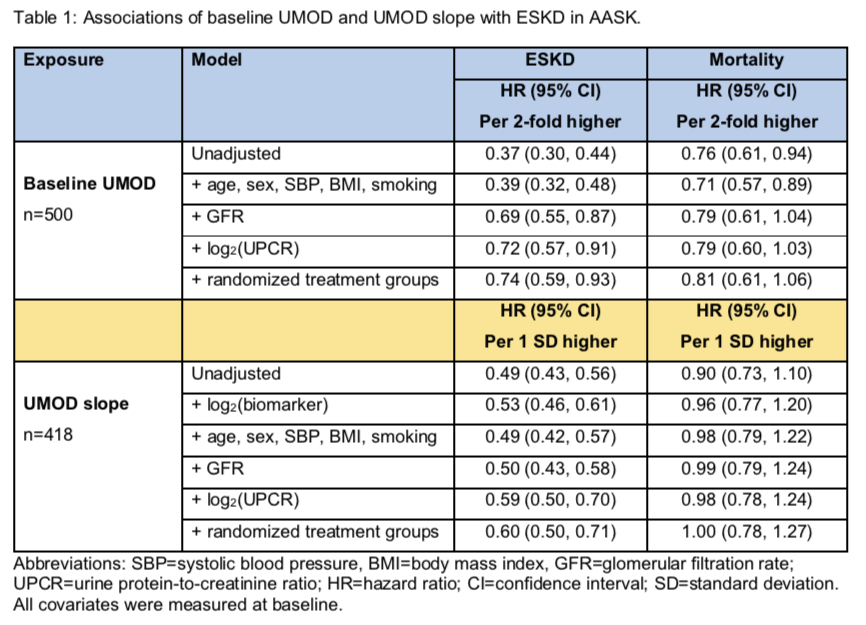