Vascular calcification(VC) is considered to be an important risk factor of cardiovascular events, which contributes to the leading cause of death in hemodialysis(HD) patients. Inspired by an extreme example of VC in dialysis patients, calciphylaxis, we hypothesized VC of branches was a better predictor of mortality than abdominal aortic calcification(AAC).

A cohort study was established including 237 HD patients. The calcification volume of abdominal aorta and its branches in CT were quantitatively evaluated through software 3DSlicer4.11. Patients were followed up to death or September 2020, and were randomly divided into training set and testing set in a ratio of 7:3. Lasso regression analysis, Cox regression and nomograms were used to construct a predictive model.

The prevalence of total VC is 95.36%. AAC is the most prevalent(88.61%), followed by calcification of internal iliac artery(85.65%). AUC of Time-dependent ROC by internal iliac artery and mesenteric artery calcification for predicting mortality is significantly higher than the others. Internal iliac artery calcification(IIAC) was screened out as the most valuable predictor for all-cause death among the arteries. IIAC (HR=1.503, P<0.001), serum albumin(HR=0.911, P<0.001) and the history of cardio-cerebrovascular diseases (HR=1.735, P=0.017) were independent factors of mortality in HD patients. The nomogram based on Cox regression model is shown in Figure 1. The clinical decision curve shows the model's high value of clinical application. (Figure 2). 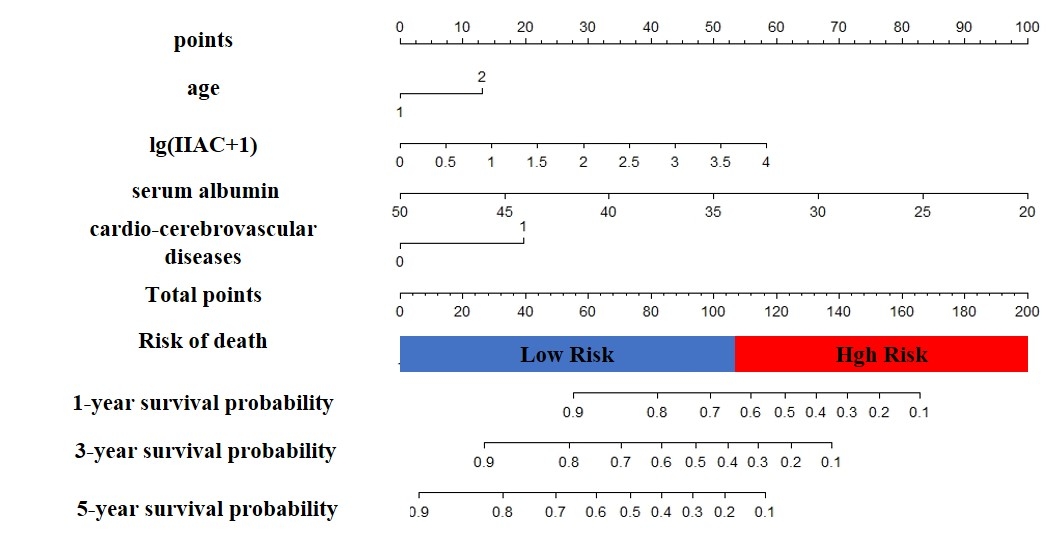