In patients with advanced CKD, a slower rate of eGFR decline after arteriovenous fistula (AVF) placement has been observed. The mechanism(s) for these findings remain unclear. We retrospectively examined the rates of eGFR decline, before and after successful AVF creation in preparation for HD, in patients who had advanced CKD.

CKD-Epi equation without race correction was used to estimate GFR. Using linear regression of eGFR, before and after AVF placement, rate of eGFR decline in ml/min/month was found in a population of 4 patients with advanced CKD. Successful AVF maturation was defined as either successful use in patients who started HD or clearance for use by surgery in patients not yet on HD. The slope of eGFR decline before and after AVF creation was compared retrospectively.

In advanced CKD patients who have HD AVFs that successfully mature, eGFR rate of decline appeared to dramatically slow after AVF creation. We additionally analyzed blood pressure and medications in these fairly extensive observation periods before and after AVF placement, and believe AVF placement to have an independent benefit. Proposed mechanisms include alterations in vascular physiology, changes in hemodynamics, improved patient adherence and closer medical monitoring that often follows AVF placement. We believe this case series adds to the growing body of data that suggests an impact on eGFR after a successful AVF creation. 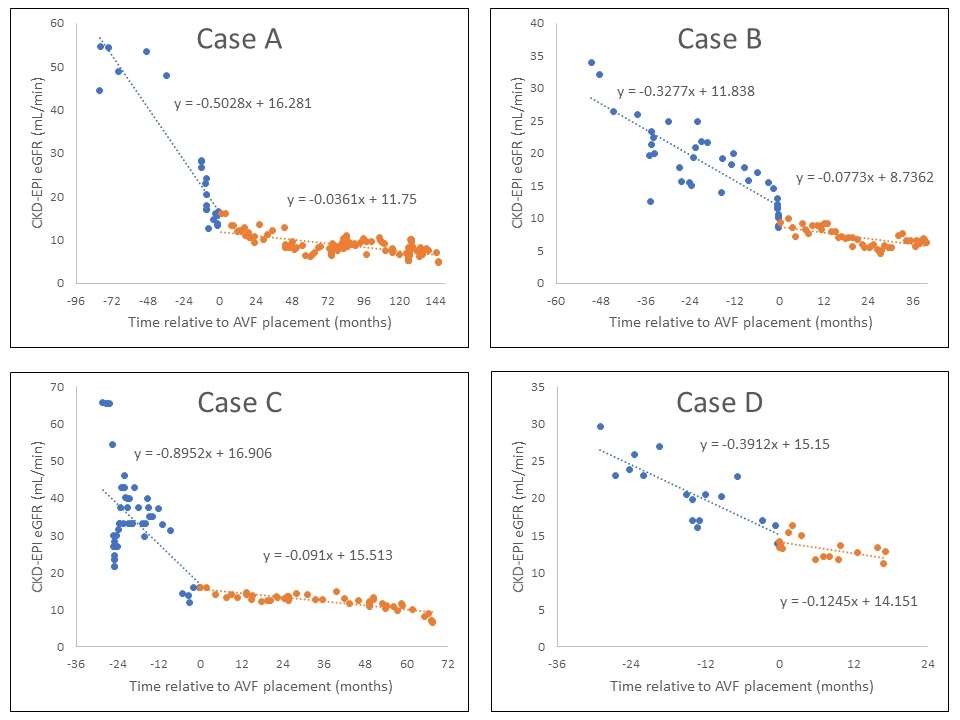