Chronic kidney disease is associated with significant morbidity and mortality in the general population, but little is known about the incidence and risk factors associated with developing kidney dysfunction in living donors following nephrectomy.

We conducted a retrospective, population-based control study using linked healthcare databases in Alberta, Canada to identify 590 donors who underwent nephrectomy between May 2001 and December 2017. The primary outcome was evidence of sustained kidney dysfunction following nephrectomy, defined as either 2 estimated glomerular filtration rate (eGFR) measurements <45 mL/min/1.73 m2 or 2 measurements of moderate or severe albuminuria that were at least 90 days apart. We used Cox proportional hazard regression analyses to examine the association between potential risk factors and the outcome of post-donation kidney dysfunction.

Over a median follow-up period of 8.6 years (interquartile range [IQR]: 4.7-16.9 years), 47 donors (8.0%) developed sustained kidney dysfunction, with an incidence rate of 9.2 per 1,000 person-years (95% confidence interval: 6.6-11.8). The median time for development of kidney dysfunction beyond the first year after nephrectomy was 2.9 years (IQR: 1.4-8.0 years). Donors who developed kidney dysfunction after donation were more likely to be older, male, have lower pre-donation eGFR, have evidence of pre- or post-donation hypertension, and post-donation diabetes. 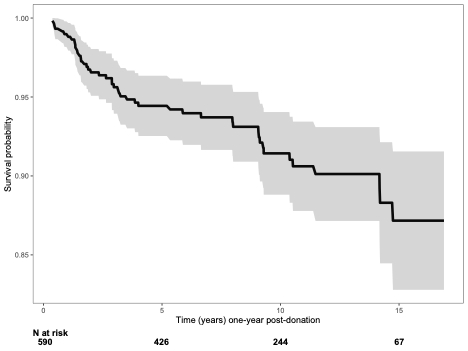