Predictors of acute kidney injury (AKI) after cardiovascular (CV) surgery have been extensively studied. However, risk prediction has been suboptimal.

In this retrospective cohort study, we enrolled adults who underwent CV surgery from 2014 to 2021 at our facility and computed tomography (CT) scan within 6 months before surgery. We excluded those with multiple or large cysts, single kidney, creatinine > 4 mg/dL, or undergoing kidney replacement therapy. Exposure of interest was height-adjusted total kidney volume (htTKV) measured by software using the three dimensional CT reconstruction. The outcome was postoperative AKI defined by the KDIGO creatinine criteria. We employed logistic regression models and the results were shown as cubic spline curves.

Among 558 patients, 196 (35.1%) developed AKI. Those with smaller htTKV were older, less likely to be diabetic, and had lower eGFR. The association between htTKV and AKI was U-shaped after adjustment for confounders including eGFR. The odds ratio for AKI was 1.60 (1.47-1.75) and 1.06 (1.02-1.11) among those with htTKV≤75 and >125, respectively, compared with htTKV 75-125 mL/m2. The U-shaped relationship between htTKV and AKI was observed among non-diabetics but not among diabetics (p for interaction 0.05). There were no effect modifications by age, sex, eGFR, or the use of diuretics for the association between htTKV and AKI.

The Association between htTKV and AKI after CV surgery was U-shaped. Smaller htTKV might reflect more severe atherosclerotic changes independent of eGFR. A small increase in the incidence of AKI among those with large htTKV might be due to kidney congestion often observed in patients with pre-operative heart failure. HtTKV could be a useful predictor for postoperative AKI among those undergoing CV surgery. 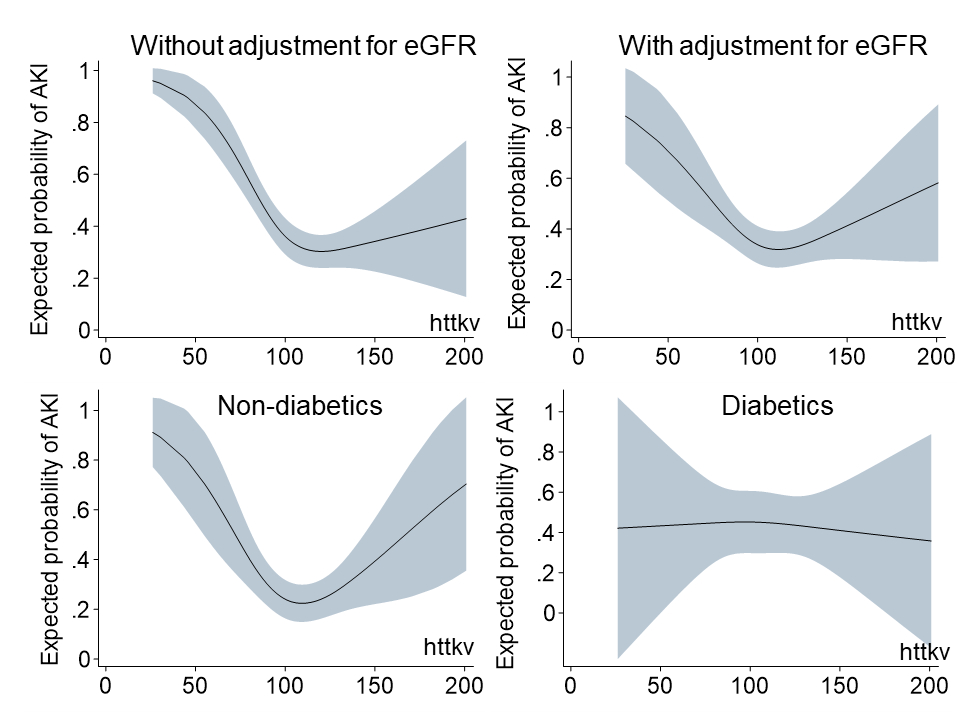