Cystinuria is an autosomal recessive disorder characterized by impaired proximal renal tubular absorption of cystine. To date no clear genotype-phenotype relationship has been established. This study reviewed genetic and clinical data of a large cohort of suspected cystinuric patients in the Rare Kidney Stone Consortium (RKSC) cystinuria registry.

Subjects with suspected cystinuria (n=76) were genotyped either by Sanger sequencing or a targeted next generation sequencing (tNGS) panel that includes the 2 cystinuria genes. Clinical data were abstracted from the RKSC cystinuria registry.

Biallelic mutations in SLC3A1 were found in 50 individuals, biallelic mutations in SLC7A9 in 21 individuals, and 1 mutation in each gene in 1 individual. Four individuals had a clear cystinuria phenotype with only a single monoallelic change in SLC3A1 or SLC7A9 detected. Median (IQR) urinary cystine was 706 (460-848) mg/day.
The Table depicts clinical details of participants with disease due to SLC3A1 and SLC7A9 mutations. Urinary cystine excretion and other clinical outcomes did not differ by genotype. Patients with SLC7A9-related disease more commonly had 2 nontruncating mutations and SLC3A1-related disease more commonly had 2 truncating mutations. Multi-exon duplications were common for SLC3A1, found in 14 instances. A total of 16 novel, 32 known SLC3A1 and 12 novel, 12 known SLC7A9 mutations were detected.

The vast majority of cystinuria patients have biallelic disease due to 2 changes in either SLC3A1 or SLC7A9, and not one of each. Cystine excretion and other clinical manifestations did not differ by genotype. Further study is needed to understand genotype-phenotype correlation and the variable outcomes seen in patients with cystinuria. 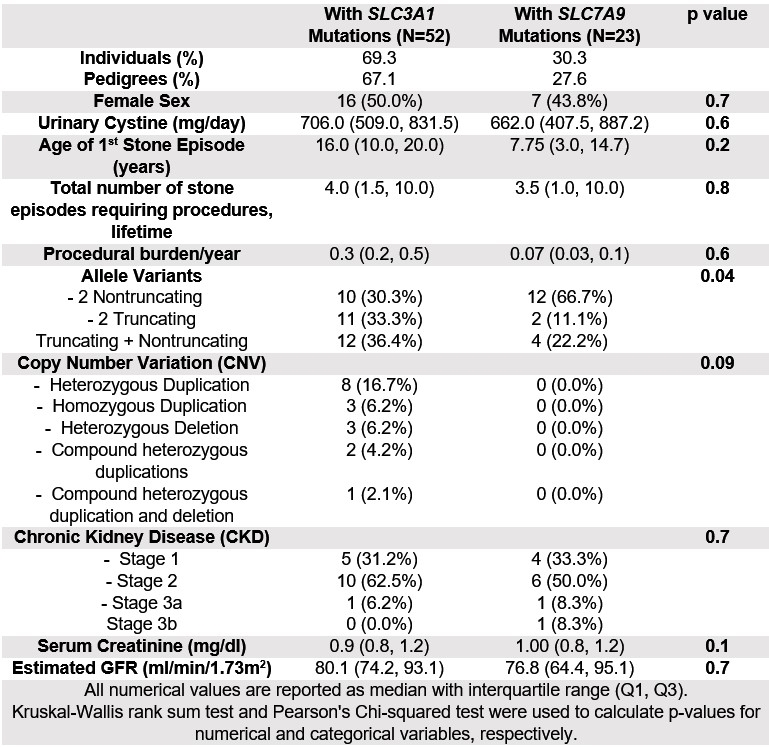