Of 650 participants, 13% were HR, 60% were LR (APOL1 status missing for 27%, Table). HR participants' biopsies showed more collapsing FSGS (p<0.001), greater interstitial inflammation (p<0.001) and interstitial fibrosis and tubular atrophy (p=0.02). The odds of rapid progression was 2.76 times higher in the HR group after adjustment. Proteinuria at biopsy was not associated with progression category, however, within the first year post-enrollment, higher nadir proteinuria (OR=1.09, p=0.02), need for multiple immunosuppressive agents (OR=1.35, p=0.001) and uncontrolled hypertension (OR=1.61, p=0.04) were associated with rapid progression.

In addition to APOL1 genotype, degree of proteinuria reduction, use of multiple immunosuppressive agents and uncontrolled hypertension are additional risk factors for rapid progression of FSGS. A better understanding of the natural history of FSGS in the context of high risk APOL1 genotypes will improve patient care and inform the design of interventional studies. 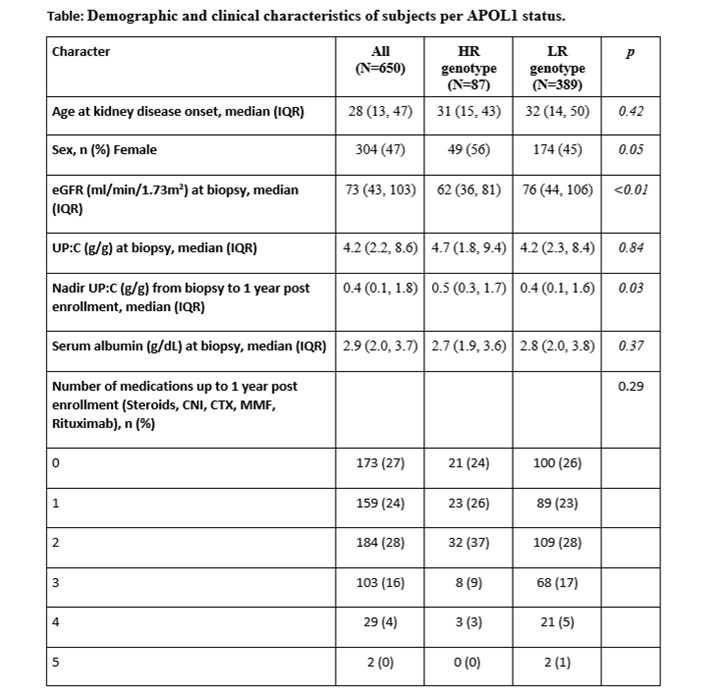