We performed a randomized cross-over study in healthy controls (HC) and CKD patients (stage 2a-3, proteinuria >500 mg/d). All subjects followed both an 8-day low Na+ diet (LSD, <50mmol/d) and high Na+ diet (HSD, >200mmol/d). If MAP increased after HSD, subjects were considered as Na+-sensitive (SS-HC). Microcirculation was assessed by using an angiopoietin-2 (Ang2) ELISA and sublingual incident dark field (IDF) imaging with and without nitro-glycerine (NTG).

We included 9 SS-HC (median age 29) and 6 CKD patients (median age 49, mean proteinuria 1.2 g/d). The mean Na+-sensitive MAP increase was 4.8 in SS-HC and 9.8 mmHg in CKD. Ang2 levels increased after Na+ loading in SS-HC, but not in CKD (Fig 1A). After LSD, no differences could be observed in microcirculatory parameters between SS-HC and CKD. In SS-HC, HSD did not influence vessel density or perfusion. In CKD, HSD resulted in lower total vessel density after NTG (Fig 1B). After NTG supplementation, total red blood cell perfusion was higher after LSD in CKD compared to SS-HC (57.52 and 46.00 mm/mm2, p=0.02) but diminished in this group whereas an increase in SS-HC was observed after switching to HSD.

We show that BP sensitivity to Na+ is accompanied by distinct microcirculatory changes in CKD as compared to SS-HC. In SS-HC Na+ loading affects the vascular permeability, yet no differences could be observed in total amount of vessels. However, in CKD Na+ loading decreases the amount and perfusion of small blood vessels, indicating that Na+ affects the capacity to adequately perfuse tissues in CKD. Authors 1 and 2 contributed equally to this abstract 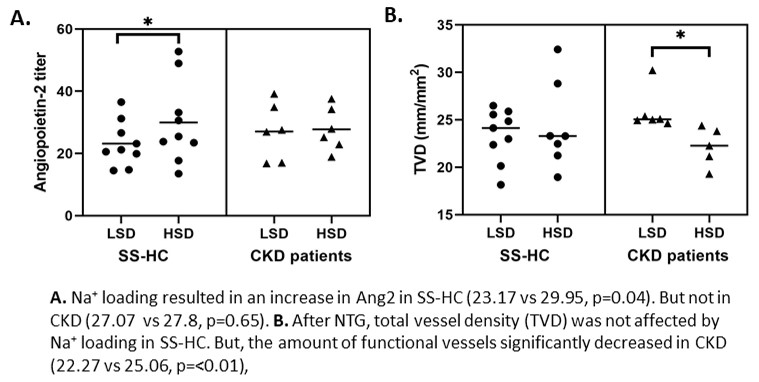