Exercise induced hypertension (EIH) is a phenomenon that is diagnosed with SBPs of >210mmHg in males and 190mmHg in females while exercising. Untreated, it can lead to increased risk of developing hypertension (HTN) along with an increase in cardiovascular morbidity and mortality. The proposed mechanisms associated with EIH include RAAS changes, arterial stiffness, and endothelial dysfunction. Generally, individuals with pre-exercise stage 1 HTN (SBP 130-139; DBP 80-89) or stage 2 HTN (SBP at least 140 or DBP 90) are evaluated for this condition.

A 19yo male college lacrosse player was noted to have a pre-participation blood pressure of 125/79 and. mild chest discomfort with training. He has no past medical history and denies any medications or drugs. A cardiology consult was obtained. Baseline EKG, echocardiogram and metabolic panel all were unremarkable. He was found to have a BP of 230/110 at stage IV of the Bruce Protocol during stress testing but EKG was negative for ischemia. He was referred to Nephrology for further evaluation. He had relatively normal ambulatory BPs while not exercising and hormonal evaluation unremarkable. The patient was felt to have EIH and was started on an ACE with improvement in his BP with exercise.

Demographically, EIH is more often reported in middle-age, distance runners than in young healthy athletes with a normal pre-participation exam. This patient is a healthy young individual who had accelerated HTN during exercise. In addition, given his pre-participation exam, he did not meet criteria for any further testing based on current recommendations. Also, his level of general fitness may not have prompted an evaluation of blood pressure during exercise. This case does support the contention that screening for EIH could be expanded to encompass those individuals with elevated blood pressure but not meeting the criteria for Stage 1 HTN or beyond. 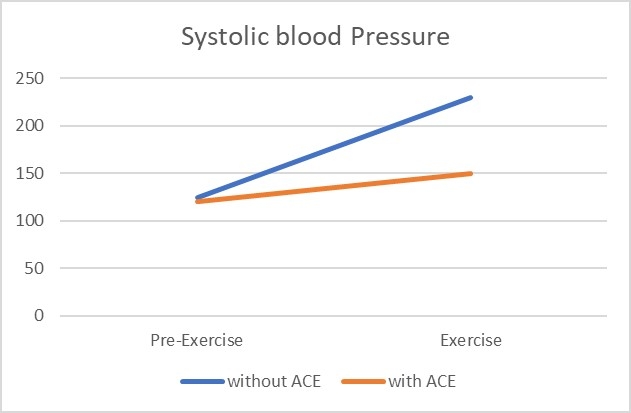