Surgery or Frailty: Who Is the Master in eGFR Decline After Renal Surgery in Living Donor and Renal Cancer Patients?

Surgery or Frailty: Who Is the Master in eGFR Decline After Renal Surgery in Living Donor and Renal Cancer Patients?

AKI and CKD are the 2 main complications after nephrectomy both on living donor(D) and on renal cancer pts(RC).It is still debatable if RN with a normal pre-operative renal function could have worse functional outcomes in term of eGFR decline in comparison to RN due to the comorbidities and frailty.Aim of this study was to evaluate in both D and RN the incidence of AKI andCKD, using a control cohort of oncological partial nephrectomy (PN) to evaluate the impact of surgery and comorbidities.

We collected a multicentric(4 different tertiary hospitals) consecutive cohort of 718 patients:256 D and 462 RC pts of which 236 PN and 226 RN. Inclusion criteria: baseline eGFR higher than 70 ml/min/1.73.Clinical and lab variables were reported for each pt. SCr and eGFR were meausured at 24h,48 h,72 h and at dismissal in the acute setting for the AKI; at 12,24,36,48,60 moths for the chronic setting for CKD.Comparisons between groups were performed using Kruskal-Wallis ranks sum and Pearson’s Chi square test Anova was used to identify differences in the evolution of eGFR between groups.

Clinical data are present in table. AKI and CKD onset are shown in the figure 1.The results of a four-way ANOVA for each AKI/CKD displayed that surgery is the variable that impacts more on AKI/CKD onset. Regarding the comorbidities, diabetes impact more in CKD stages onset in both the global and the pts population.

AKI and CKD are common both in D and in RN, with a similar eGFR decrease over time both in acute than in chronic.Surgery appears to be the predominant factor in the onset of AKI/CKD, while comorbidities, especially diabetes, may have a major impact on the long-term deterioration of kidney function. 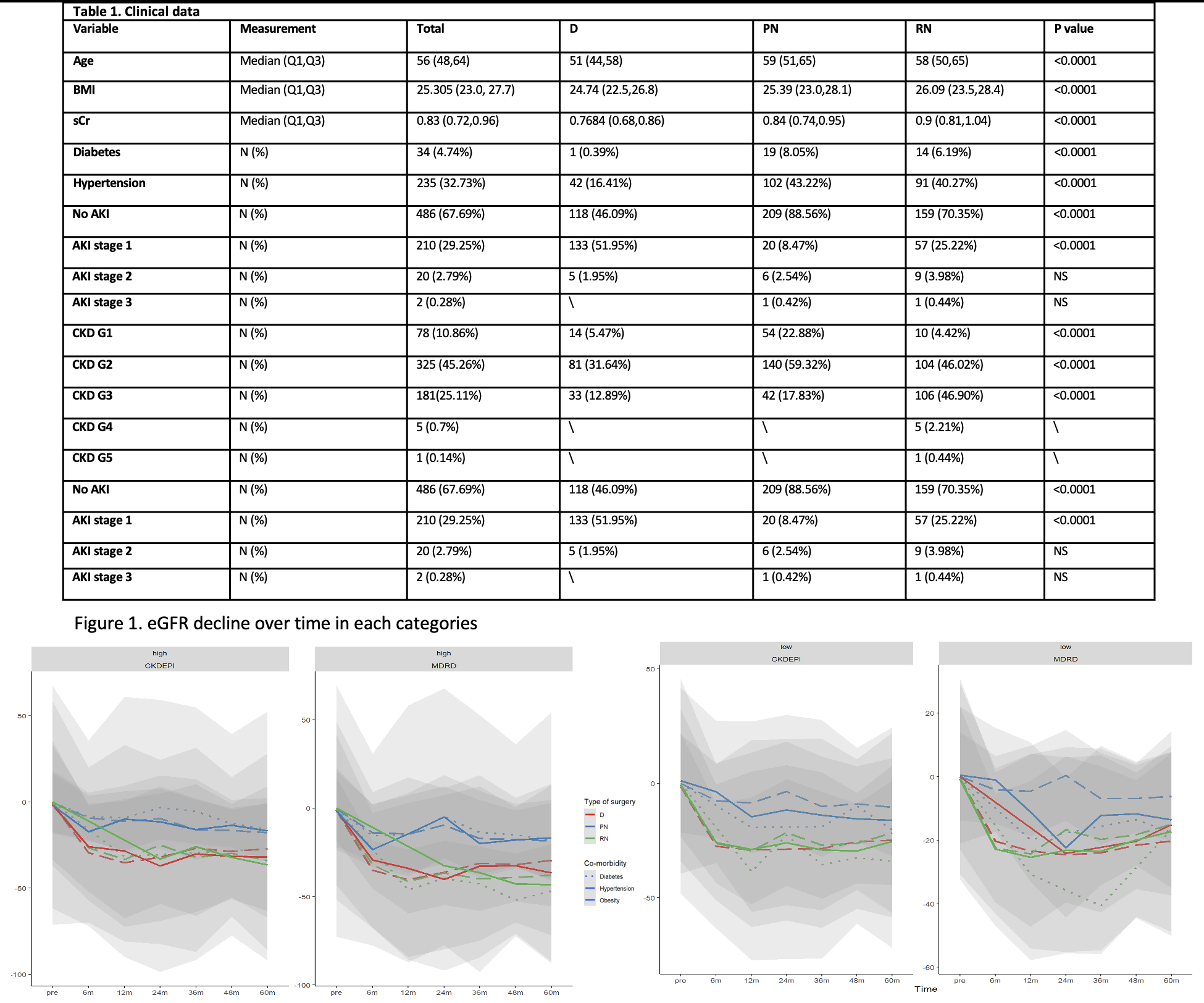