BK virus nephropathy (BKVN) is characterized by a tubulointerstitial injury caused by BK virus infection, which is more common after kidney transplantation. Few cases have been described outside the context of renal allograft. This study aims to elucidate the clinicopathologic features and prognosis of BKVN after hematopoietic stem cell transplantation (HSCT).

A total of 667 patients who received HSCT treatment at 2 centers from January 2020 to April 2022 were reviewed. The clinical characteristics, renal biopsy results, and prognosis of 7 BKVN patients were analyzed.

The incidence of BKVN after HSCT was 1.0%, with a median age of 17 years and a median onset time of 12 months post-HSCT. The primary diseases were thalassemia major (5 cases) and acute lymphoblastic leukemia (2 cases). Haploidentical transplantation was performed in 6 patients (85.71%), and cord blood in1patient. Hemorrhagic cystitis occurred in 5 patients (71.43%) after HSCT. Proteinuria was absent or slight and a BK viral load >4 log copies/ml in blood in 7 cases, the median serum creatinine levels were 2.19mg/dl at the time of biopsy. Histologically, all cases showed tubulointerstitial inflammation while glomeruli were spared. Nuclear inclusion was detected in 5 cases (71.43%). There were 4 (57.14%) with severe tubular atrophy and interstitial fibrosis (IFTA), 2 (28.57%) were moderate and 1 (14.29%) mild; with AST stage B1(28.57%), B3(28.57%), C (42.86%). The SV40 T antigen was detected in tubular epithelial cells in 7 cases (100%). 5 (71.43%) were treated with cidofovir against BK infection, while 2 were given intensive immunosuppressive therapy for GVHD. 3 (42.9%) progressed to end-stage renal disease (ESRD) within 6 months after renal biopsy, among which 2 was AST stage C and 1 was stage B1.

Patients who undergo HSCT, especially haploid transplantation, may develop BK virus infection, initially presenting as high levels of BK viruria or BK viremia and then progressing to BKVN, which will result in ESRD. 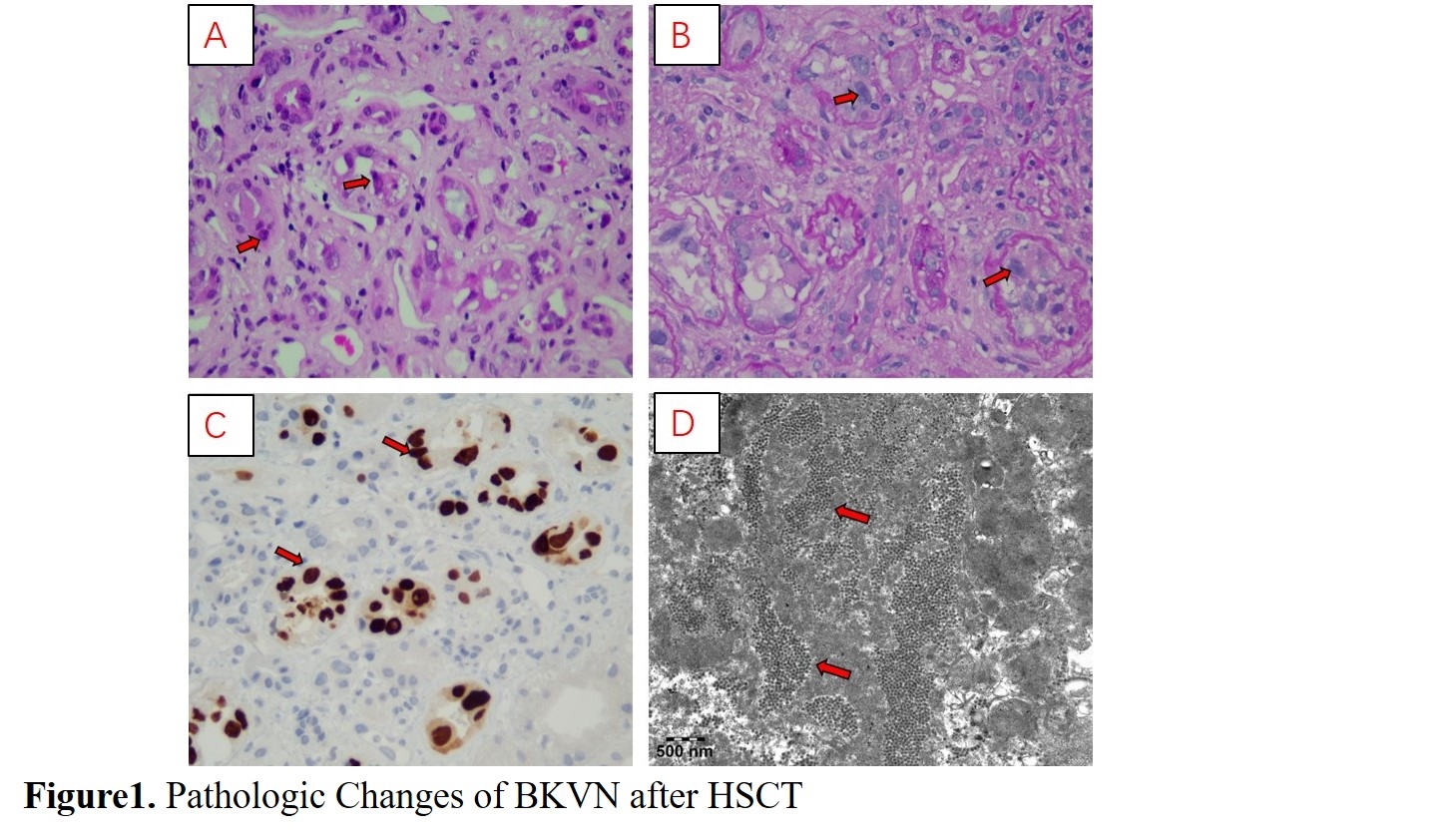