Semaglutide Improves eGFR Slope vs. Placebo Regardless of Baseline HbA1c and Blood Pressure in People With Type 2 Diabetes: A Post Hoc Analysis of SUSTAIN 6 and PIONEER 6

Semaglutide Improves eGFR Slope vs. Placebo Regardless of Baseline HbA1c and Blood Pressure in People With Type 2 Diabetes: A Post Hoc Analysis of SUSTAIN 6 and PIONEER 6

Previous analyses of SUSTAIN 6 and PIONEER 6 cardiovascular (CV) outcome trials indicate that semaglutide (respectively, subcutaneous and oral) reduces the decline rate (slope) of estimated glomerular filtration rate (eGFR) vs placebo in people with type 2 diabetes on standard of care antidiabetes medication at high CV risk. The effect was more pronounced in those with a comparatively lower eGFR (<60 mL/min/1.73 m2). This post hoc analysis evaluated whether the effect of semaglutide vs placebo on eGFR slope was consistent across different levels of glycemic control (HbA1c) or blood pressure (BP) at baseline.

Pooled SUSTAIN 6 and PIONEER 6 data were analyzed for change in eGFR slope from baseline in HbA1c (<8 and ≥8%) and BP (<140/90 and ≥140/90 mmHg) subgroups. A sensitivity analysis was performed adjusting for age, sex, diabetes duration, antidiabetes medication, smoking status, prior CV events, geographic region, and eGFR at baseline. Groups were also analyzed by baseline eGFR (<60 and ≥60 mL/min/1.73 m2).

Semaglutide reduces eGFR slope decline vs placebo regardless of glycemic control or BP level, suggesting a consistent effect of semaglutide on eGFR preservation. 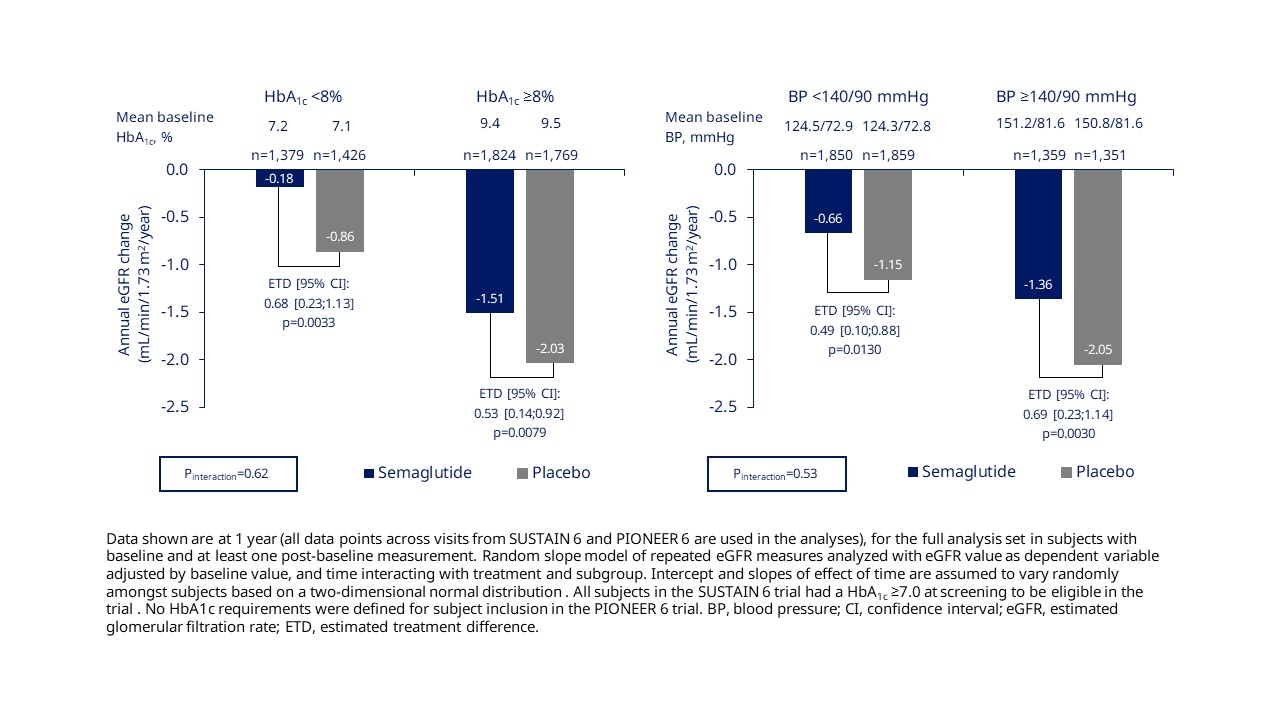 Estimated annual eGFR slopes according to treatment, and HbA1c and BP subgroups at baseline