We previously demonstrated that excessive anticoagulation with warfarin or dabigatran may result in acute kidney injury in some patients with chronic kidney disease and named it anticoagulant related nephropathy (ARN). An animal model of 5/6 nephrectomy rats treated with warfarin or dabigatran reproduces the main pathologic features of ARN. We had reported that C57BL/6 mice only partially develop ARNshowing increased serum creatinine and hematuria but no red blood cell (RBC) casts in the kidney. The aim of this study was to investigate whether ARN can develop in 129S1/SvImJ mice.

5/6 nephrectomy was performed in 129S1/SvImJ mice. Three weeks after the surgery, mice were treated with warfarin (1.0 mg/kg/day and 1.5 mg/kg/day) for 7 days. Serum creatinine, hematuria, and prothrombin time (PT) were monitored daily. Renal morphology was evaluated at the end of the studies.

Treatment with warfarin resulted in PT elevation 2-3 folds from baseline (1.0 mg/kg/day warfarin) and 4-5 folds from baseline (1.5 mg/kg/day warfarin) by day 7. Serum creatine elevation by day 7 was dose-depended. Similarly, hematuria was increased in a dose-depended manner. Histologically, some animals had RBCs in the tubules with acute tubular epithelial cell injury.

Our findings suggest that 129S1/SvImJ mouse strain could be more suitable animal model to study ARN than C57BL/6 mouse strain. 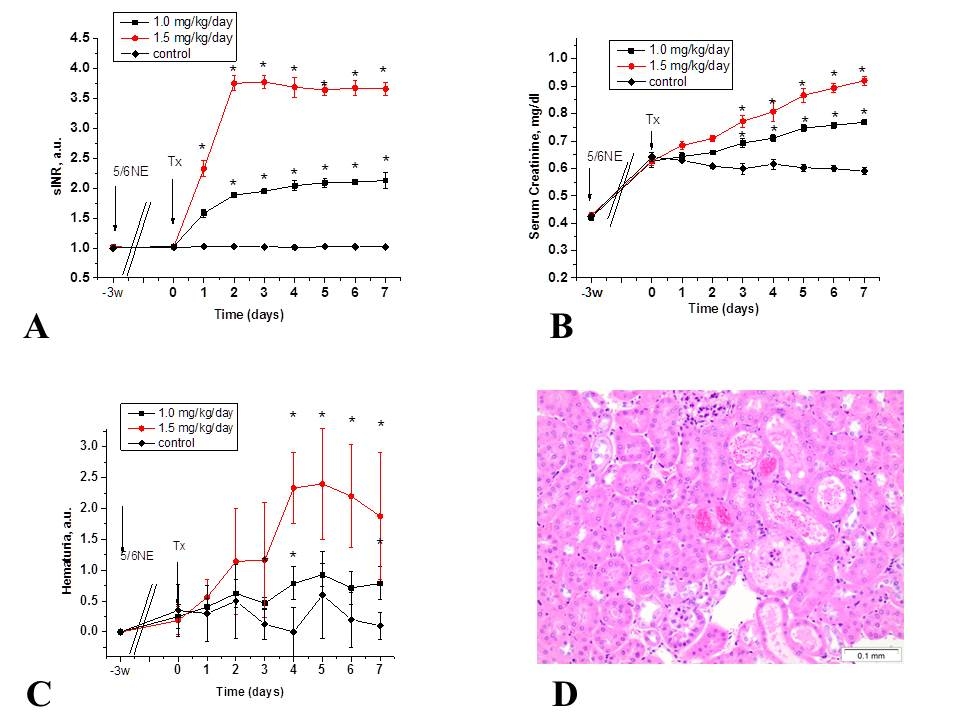