Persistence of Signs and Symptoms in Treated Patients With IgA Nephropathy: Evidence From Real-World Data

Persistence of Signs and Symptoms in Treated Patients With IgA Nephropathy: Evidence From Real-World Data

Immunoglobulin A nephropathy (IgAN) is the most common form of primary glomerulonephritis worldwide, with an estimated annual incidence of 25 per million. It currently has limited treatment options. This analysis aimed to describe IgAN signs and symptoms (S&S) in treated patients.

The Adelphi IgAN Disease Specific Programme was a point-in-time survey of IgAN-treating nephrologists in the US, EU5 (France, Germany, Italy, Spain, UK) and Asia (China and Japan) between June and October 2021. Nephrologists completed structured online records for successive patients presenting with IgAN, including patient’s demographics, IgAN treatment history, and a list of 29 current IgAN S&S.

Despite treatment with standard of care (ACEi, ARB, Statins, Corticosteroids), most patients presented with S&S at time of survey. This was consistent in patients with longer treatment duration. Common S&S experienced were proteinuria, hematuria, hypertension, and fatigue (Table 1).

Despite treatment, IgAN S&S persist in the majority of patients. Proteinuria persists in many patients, increasing the risk of progression to kidney failure. This shows a need for better treatment options for IgAN. 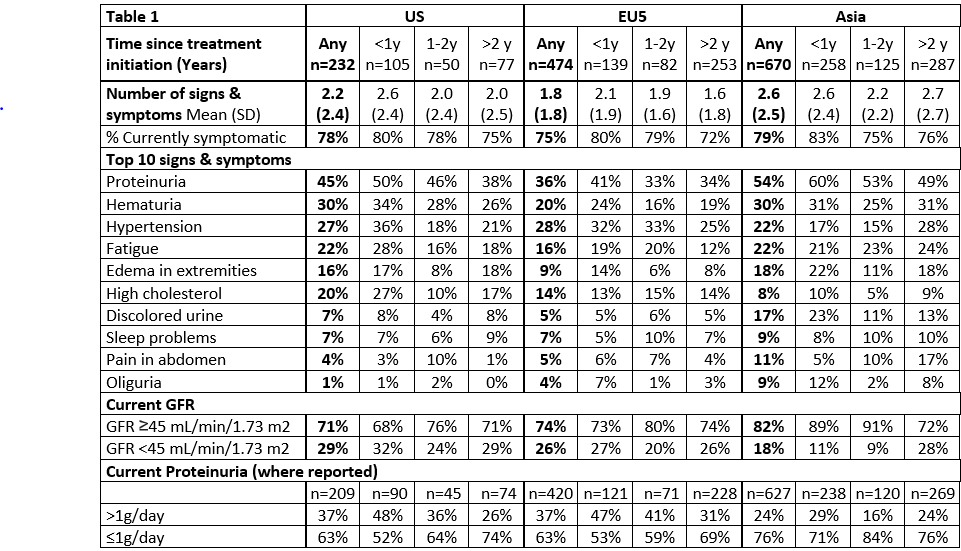