Patients with diabetic nephropathy (DN) often have glomerular, tubular, interstitial, and vascular lesions on biopsy, though a recently proposed DN classification focuses on glomerular features. While it is important to quantify the extent of these histopathological manifestations across all stages of DN, we sought to investigate whether these findings can be identified in early DN patients.

A deep learning framework known as a feature pyramid network (FPN) was implemented to classify digitized renal biopsies as class I or II DN. PAS-stained whole slide images (WSIs) of cases with class I (n=23) or class II (n=77) DN were divided into training, validation, and test sets in 3:1:1 ratio. This process was repeated five times to achieve a 5-fold cross validation. The FPN expected two inputs, 224x224-pixel patches cropped from WSIs and 16x downsampled WSIs, to learn and combine features at two levels of magnification. Class activation maps (CAMs) were generated to visualize informative regions on the WSIs.

Our FPN model achieved an accuracy of 0.8 and an F1 score of 0.6. On a representative set of test images, we found the majority (~84%) of patches identified by CAMs as highly informative for model prediction contained tubules or interstitium, not just glomerular regions (Fig. 1).

Our study identified several regions on the biopsy images as informative for prediction of class I vs II DN. Further analysis can elucidate the importance of various histopathological features of early stage DN. 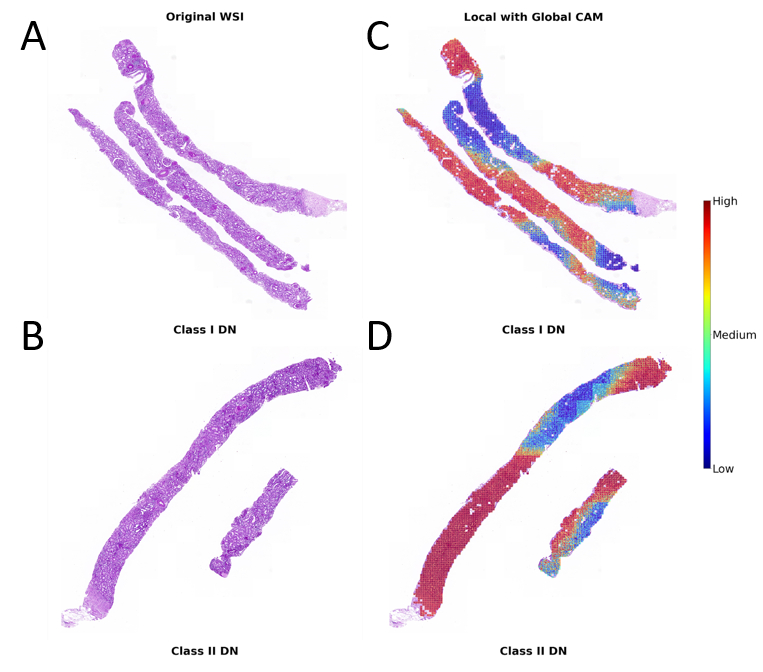 (A and B) Whole slide images and their class labels (Class I & II DN). (C and D) Class activation maps generated on the images, indicating the regions highly associated with the corresponding label. The warmer the color, the higher the probability of a region contributing to the DN class prediction.