We performed a retrospective query of an institutional registry of nephrectomies for RCC in 2006 to 2021. Demographics, creatinine (SCr), and hemoglobin within one week prior to surgery were reviewed, as well as intraoperative blood loss. SCr was used to calculate eGFR using CKD-EPI 2021. Nephrectomy history was reconstructed based on documented surgical history between 1976 and 2021.

RePN conveys renal functional decline, as well as increased intraoperative blood loss with each subsequent surgery. Our analysis suggests functional anemia is driven by partial nephrectomy frequency. Together, these impacts must be considered when counseling patients on available treatments to balance oncologic efficacy with prevention of chronic kidney disease and anemia. 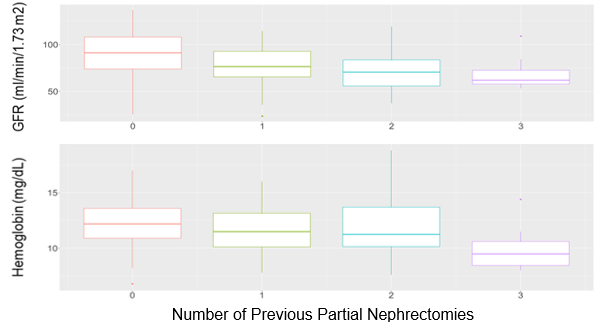