Chronic kidney disease-associated pruritus (CKD-aP) is common in hemodialysis (HD) patients, impacting quality of life (QoL). In the Phase 3 KALM studies, difelikefalin (DFK), a selective kappa opioid receptor agonist approved in the United States and Europe for the treatment of moderate–severe pruritus in adults undergoing HD, improved itch intensity and QoL. The impact of DFK treatment on the subdomains of the 5D-itch scale (a multidimensional questionnaire validated in patients with chronic pruritus) were explored.

In this pooled KALM-1 and KALM-2 analysis (n=712), HD patients with moderate–severe CKD-aP were randomized 1:1 to receive intravenous DFK 0.5 µg/kg or placebo (PBO) 3 times/week (Wk) for 12 Wks (double-blind [DB], PBO-controlled phase), followed by an up to 52-Wk open-label extension ([OLE] all patients receiving DFK). The change from DB baseline (BL) in 5D-itch scale domains was assessed including duration, degree, direction, and body distribution of itch and disability (sleep and daily activities) with a 2-Wk recall period.

In the DB phase, patients on DFK reported greater improvements than PBO in all domains. Throughout the OLE, patients reported ongoing improvements: Duration of itch (~6 h/day at OLE Wk 52 vs ~12–18 h/day at BL); Degree (“mild-moderate” vs “moderate-severe” at BL); Direction (“a little/much better” vs “unchanged” at BL); Disability, (“rarely” affected daily activities [including sleep] vs “frequently/occasionally” affected at BL); and Distribution (3–5 body parts affected vs 6-10 at BL).

In the 12-wk DB period patient-reported improvements in 5D-itch scale domains were greater with DFK than PBO. In the OLE, with all patients receiving DFK up to 52 wks, further improvements were observed across all domains. 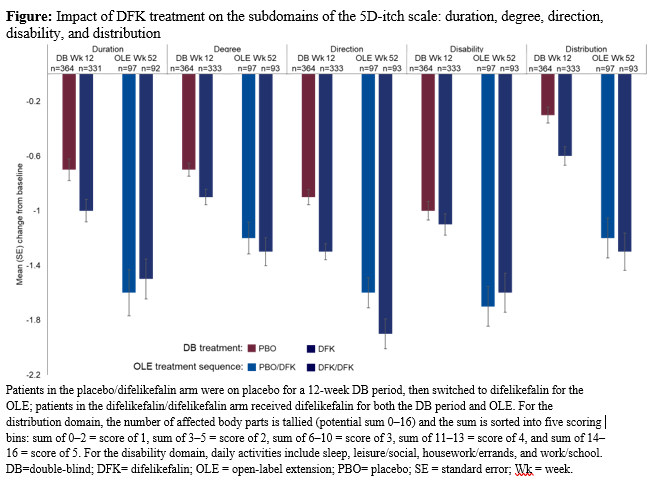