Urinary extracellular vesicles (uEVs) have been shown to parallel physiologic and pathologic processes in the kidney, but minimal literature exists studying the daily variability of EV secretion in healthy patients. In this pilot study, we used Nanoparticle Tracking Analysis (NTA) to study particle and EV secretion in urine throughout a 24-hour collection in 9 healthy individuals.

We collected every void during a 24-hour period for 9 healthy individuals starting with the second morning void and ending with the first of the following day for a total of 61 samples and an average of 6.8 voids per individual. We created a 24-hour collection sample by combining 20% of each void and quantitated creatinine concentration in each void using the picrate alkaline colorimetric assay. EVs were separated from urine with differential centrifugation at 4,600g and 21,500g to remove cells and debris and to pellet EV respectively. The uEV pellet was washed 3 times with a low ionic strength buffer and centrifuged at 25,000g serially to collect uEVs. We performed particle count and sizing on each final pellet using an NTA instrument (ZetaView PMX-120; Particle Metrix). Nanoparticle concentration was normalized to creatinine concentration for each void to account for hydration status. Paired t-test was used to evaluate whether any individual void was significantly different from the 24-hour collection, defined as p<0.05.

We found no difference in uEV concentration or median diameter between any individual void in a 24-hour collection and the 24-hour sample. Further studies are needed to dissect the mechanisms of uEV size differences and variability of uEV markers like AQP2. 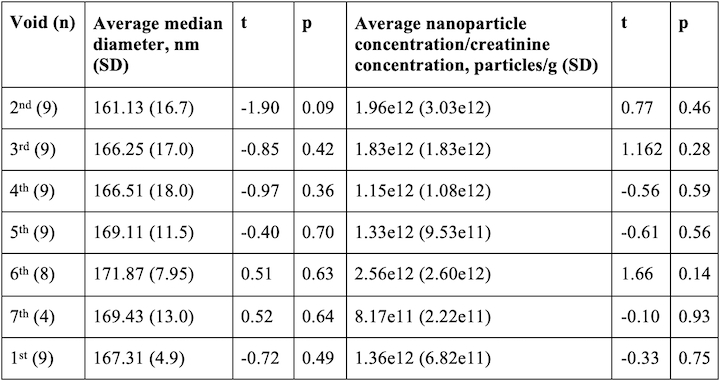