Emerging of new treatments such as immune checkpoint inhibitors and targeted therapies have changed treatment of cancer patients. All these new treatments can cause different side effects, including renal complications. Brentuximab vedotin is a CD30-directed antibody drug conjugate, which is used to treat relapsed or refractory Hodgkin lymphoma and systemic anaplastic large cell lymphoma. Here we present a case of acute interstitial nephritis (AIN) in a 65 years old woman with T-cell lymphoma on Brentuximab vedotin (trade name: Adcetris) therapy.

A 64 year-old female was diagnosed initially with cutaneous T-cell Lymphoma with subsequent metastasis to the liver despite multiple therapies. She was started on Brentuximab vedotin. She had normal kidney function at baseline and after two doses of Brentuximab vedotin her kidney function started declining with peak serum creatinine at 3.75 mg/dl. Urinalysis showed 1+ proteinuria, WBC 4, and RBC 4. A renal biopsy was performed and showed diffuse acute interstitial nephritis (Image 1, PAS, 200x). Subsequently, Brentuximab was discontinued and the patient was started on oral steroid taper with improving kidney function back to baseline creatinine of 1 mg/dl.

To the best of our knowledge this is the second case of TIN following Brentuximab vedotin. Karyomegalic interstitial nephritis (KIN) was previously described as a potential side effect with Brentuximab. KIN is characterized by enlarged hyperchromatic tubular epithelial cell nuclei which was not seen in our patient’s renal biopsy. The timing of AKI has coincided after the second cycle of Brentuximab in our patient making it the major contributor for the AIN. High suspicion for AIN is important as early recognition and treatment have better prognosis. The key prognosticating factor for renal recovery is the extend of renal fibrosis. 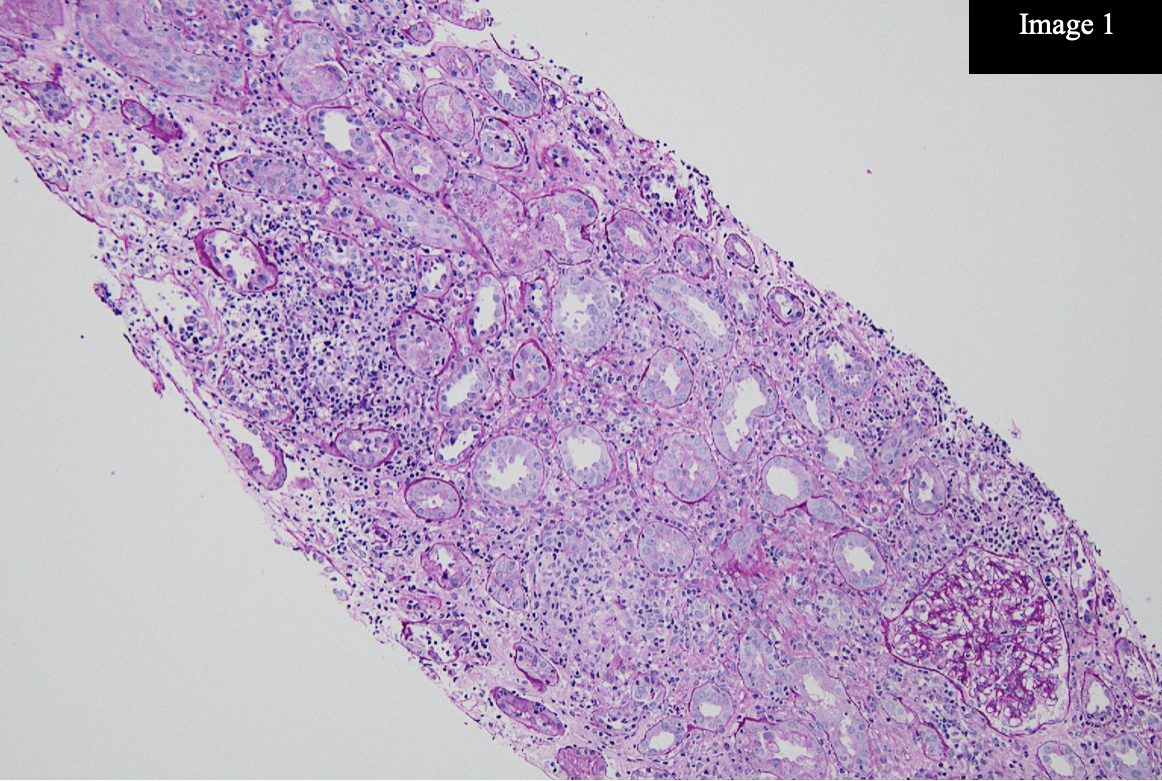