A recent KDIGO guideline recommends intensive blood pressure (BP) control in chronic kidney disease. However, no consensus on the optimal BP has been made in the dialysis population. With a well-characterized peritoneal dialysis (PD) cohort, we evaluated the impact of BP on long-term mortality.

With the incident PD patients who had more than 6 months' follow-up between 2000 to 2019 (n=490), the relationship between BP and mortality rate adjusting for age, sex, BMI, and comorbidities was analyzed. Mean BP levels at 3-6 months after PD initiation were studied for predicting all-cause mortality as well as fatal and non-fatal cardiovascular (CV) events.

Patients who started PD in the 2000s showed improved survival rates than before. Low SBP < 120 mmHg showed the highest mortality risk. And high SBP > 160 mmHg was also associated with increased mortality even after adjusting for well-known risk factors. 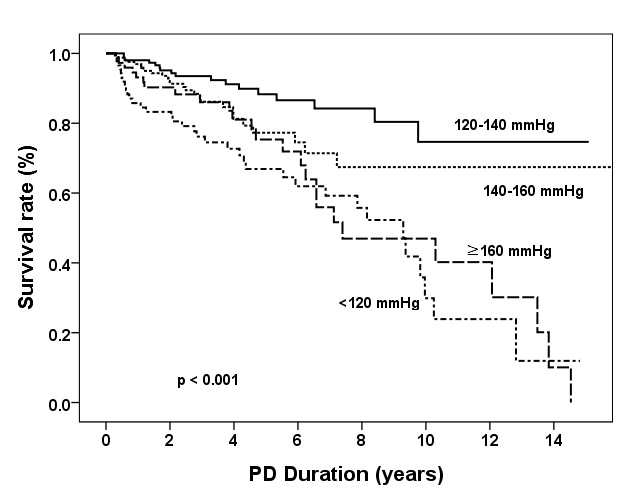