Alport syndrome is caused by biallelic pathogenic variants to COL4A3 and COL4A4 and hemizygous COL4A5 variants, but the pathogenicity of heterozygous variants at these loci is now apparent. The basement membrane disease phenotype results in hematuria, proteinuria and kidney failure, and deafness. Kidney cysts have also been occasionally associated with this disorder and we aimed to determine if the etiology of some ADPKD diagnosed patients are COL4A3/A4/A5 pathogenic variants.

ADPKD spectrum patients were genetically screened with a targeted next-generation sequencing panel including PKD, other kidney, and ciliopathy genes, and segregation performed by Sanger sequencing. Individuals with single pathogenic/likely pathogenic COL4A3/A4/A5 variants were characterized by imaging and the clinical phenotype determined from chart review. Cases with variants in more than one gene were excluded.

A total of 16 families with an ADPKD spectrum diagnosis (25 patients) had single COL4A3/A4/A5 pathogenic variants (Table 1), including 3 COL4A5 males. Kidney cyst numbers ranged from 1 to >18 with significant variation in cyst size; liver cysts were documented in three individuals. Phenotypes identified at the diagnosis included: hematuria (36%), proteinuria (14.2%), and abdominal pain (19%) and on detailed workup, gross hematuria (16%) microhematuria (56%), proteinuria (44%), and hypertension (48%) were characterized. Two patients had kidney transplants. The median age at diagnosis was 46.5 years (4 - 73) with a median eGFR of 61 mL/min/1.73m2; ranging from 11 to 120; 1 male COL4A5 subject had an eGFR of 15. Glycine substitutions in the triple helix region of the protein accounted for 22 out of 25 patients.

Individuals with heterozygous pathogenic variants to COL4A3/A4/A5 can present with multiple kidney cysts, resulting in an ADPKD spectrum diagnosis, although most patients have additional Alport related phenotypes. Genetic screening panels of PKD patients should include the COL4A3/A4/A5 genes. 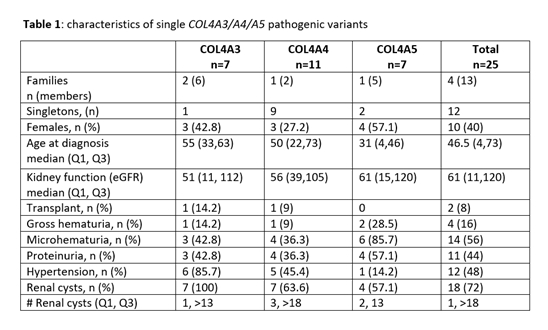