Although Chronic Kidney Disease (CKD) is common among aging patients, and although factors associated with its progression have been studied over decades, little is known about the rate of renal functional decay in this population.

Between January 2012 and December 2017, we included 1071 adult CKD patients on conservative treatment in a 1:1 propensity-score matched study of older (O, >65yr) and younger (Y, ≤65yr) individuals. Factors associated with the slope of the decline of eGFR (S), such as proteinuria, initial eGFR, diabetes, sex, and use of angiotensin-converting enzyme inhibitors/angiotensin receptor blockers (ACEI/ARB) were analyzed. Inclusion criteria were at least two consultations in the service, and an initial eGFR lower than 45 ml/min/m2. Patients were classified as fast progressors when S exceeded 5 ml/min/1.73 m2/yr).

In patients over 65 years of age, CKD progression was slower than in younger patients even after multiple adjustments. This finding should be taken into consideration during both conservative management and preparation for dialysis. 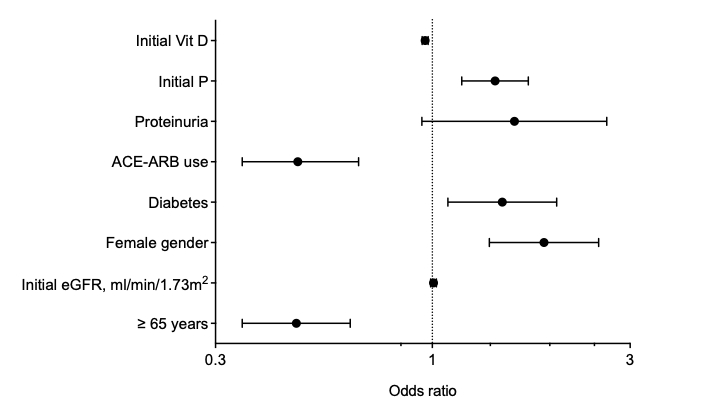 Odds ratio of fast progressor of renal function decline, defined as a reduction above 5 ml/min/1.73m2/year