Selpercatinib (LOXO-292) is a novel selective RET inhibitor for RET-dependent malignancies. The adverse effect profile estimates ~9% elevated creatinine (Cr) after therapy initiation (Drilon et al, NEJM, 2020). Creatinine however may not be the best estimator of kidney function given selpercatinib is a MATE-1 inhibitor that may potentially lower tubular secretion of Cr. To date, there is no literature that describes Cr in these patients or the role of cystatin C (which is not secreted like Cr), as an alternative estimator of kidney function.

11% (10/94) met criteria for AKI after selpercatinib initiation. The Figure below shows five patients had stage 1 (50%), 3 patients stage 2 (30%), and 2 patients stage 3 (20%) AKI. At 12 months Cr remained ≥0.5 in 2 patients (20%). Only 50% of patients had cystatin C levels checked and the Figure below shows that in the majority of cases, cystatin C is lower than Cr when checked at the same encounter. Two patients had kidney biopsies. Kidney biopsy for patient 6 showed acute tubular injury in the setting of diarrhea. Patient 9 had a kidney biopsy at an outside hospital that showed interstitial nephritis but details not known since he was lost to follow up.

As the use of selpercatinib grows in patients with RET-fusion malignancies, it is essential to better characterize the significance of elevated Cr findings. At this point, it is unclear if this is true AKI or elevated serum Cr due to inhibition of tubular Cr secretion. Prospective studies that involve Cr and simultaneous cystatin C should be performed to better estimate true kidney function in patients on selpercatinib. 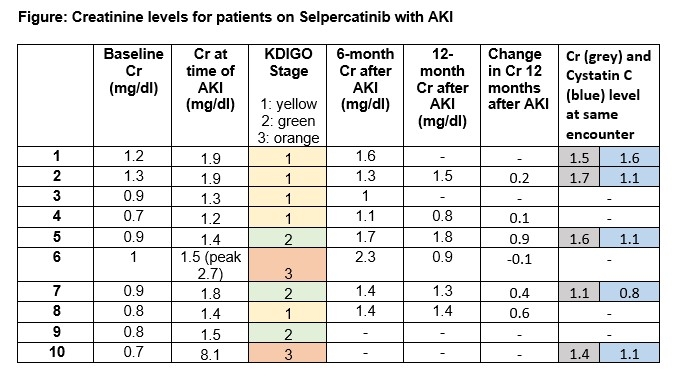