NPHS2 encodes for podocin, a protein necessary to the structure of the slit diaphragm. NPHS2 variants are associated with autosomal recessive SRNS. C- terminal part of podocin is responsible for the protein oligomerization (DOI: 10.1007/s10157-016-1331-39) and heterozygous LoF variants of this region can lead to protein retention in the cell cytoplasm, causing a dominant-negative effect similar to the recessive condition. Two families with AD glomerulopathy and C-terminal LoF of the podocin have been described (Seidl, D. Nephrol Dial Tranplant 2022 37:suppl3; MO044). We identified a family with a heterozygous frameshift variant of NPHS2 on exon 8 segregating in all affected members tested.

A 4 years old male was investigated for proteinuria. Family history underlined 4 generations of affected family members following an AD transmission. Father (III:2) was diagnosed with Minimal Change Disease at 15 years old, and he later developed end stage kidney disease (ESKD). Paternal grandmother (II:1) and great-grandfather (I:2) were affected by ESKD. We also found proteinuria in the sister; after few years she and her brother developed ESKD. We performed exome sequencing in III:1, III:2, IV:1, and IV:2 and we filtered a panel of 388 genes identifying a unique heterozygous variant segregating in all the affected members of NPHS2 (NM_014625:c.984del; p. Q328Hfs*20). Sanger sequencing validated it and revealed the same variant in II:1, therefore it was absent in III:3.

We presented a tree family supporting the AD transmission of NPHS2-related glomerulopathy due to a LoF at the –C terminal. This underlines the importance of the variant itself in the genetic counseling and should point out the necessity of a periodic pipeline revision of the molecular diagnosis of the kidney disease. 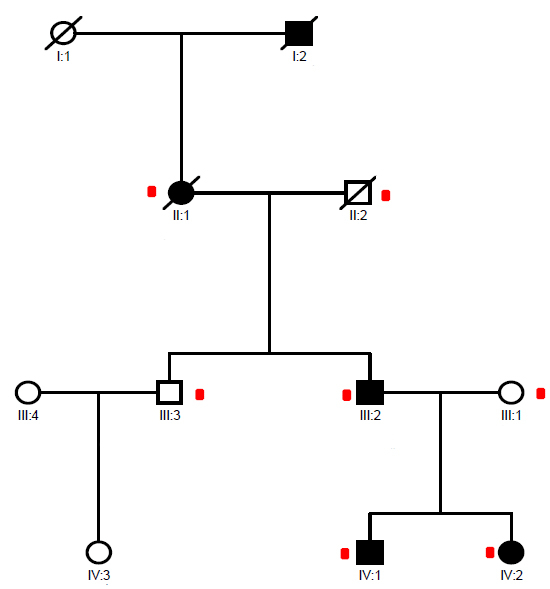