Adherence to Guidelines for Management of Hypertensive Emergency

Adherence to Guidelines for Management of Hypertensive Emergency

This is a retrospective study of patients admitted for hypertensive emergency from 2016-2018 within the Yale New Haven Health System. We used International Classification of Diseases codes, labs and manual chart review to assess end organ damage. We then calculated percent adherence to BP reduction goals set by 2017 American College of Cardiology/American Heart Association guidelines in all patients and by race.

We identified 596 patients admitted for hypertensive emergency. Patients were 65 ± 16 years, 50% male, 43% Black with median BP on admission of 207 [193, 226]/ 110 [94, 126] mmHg. Most patients were admitted with ischemic stroke followed by pulmonary edema (Table 1). BP reduction goals were not achieved among most patients at 6 hours and 24 hours regardless of end organ damage type. Black adults are less likely to achieve BP reduction for patients with hypertensive emergency and acute coronary syndrome (ACS) or hemorrhagic stroke (Figure 1).

Adherence to BP guidelines in treatment of patients admitted for hypertensive emergency was found to be suboptimal. Black patients with ACS and ischemic stroke had lower rates of BP control. Future efforts should focus on understanding the reasons behind the lack of guideline adherence and racial inequities in treatment. 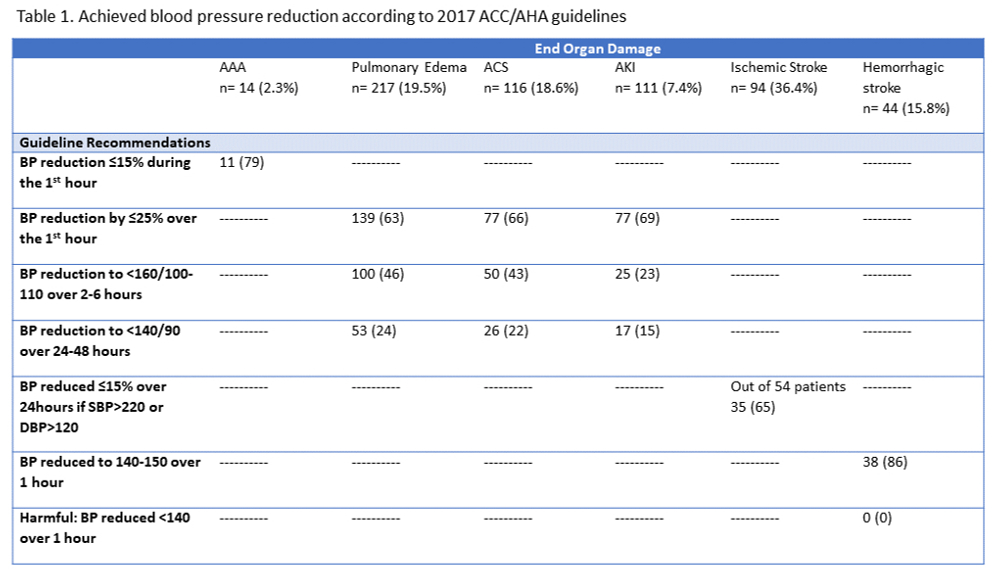