Remdesivir is FDA approved for treatment (txt) of COVID19 in hospitalized adults and older children but is available only through an FDA EUA in pts <12 yo or <40 kg due to limited safety. Remdesivir is not recommended for use in pts with eGFR < 30 mL/min/1.73 m2 due to renal excretion and limited data. Children with ESKD have increased morbidity and mortality secondary to COVID-19 and limited txt options. Determining pharmacokinetics (PK) of children on dialysis remains a priority. Here we report the PK of remdesivir and its active metabolite (GS-443902) for txt of COVID19 in a 2 yo on intermittent hemodialysis (IHD).

A 2 yo male with ESKD on chronic IHD was admitted in December 2021 after developing respiratory distress and hypoxia. SARS-COV-2 PCR was positive and chest x-ray showed viral airway disease. Due to severity of illness, he was treated with 2 doses of intravenous remdesivir (5 mg/kg loading dose after IHD #1 and 2.5 mg/kg after his next IHD 44 hours later.)
The plasma concentration of remdesivir quickly decreased from 112 ng/mL to undetectable between 1- and 6-hours post-infusion. GS-441524 levels rose between 1- and 6-hours post-infusion (694 ng/mL to 837 ng/mL) and remained stable at 898 ng/mL 2 days later, prior to the next IHD (fig 1), consistent with minimal clearance between IHD. GS-441524 during IHD was calculated to have an elimination rate constant of 0.154 hr-1 with a half-life of 4.5 hours during iHD. HD performed prior to the second dose of remdesivir reduced GS-441524 plasma concentration by 37%. We did not observe accumulation of remdesivir, and GS-441524 accumulation was prevented by IHD. The pt was discharged after 4 days and did not have sequelae of txt with remdesivir.

We report successful and safe txt of a COVID positive IHD dependent toddler with remdesivir. Given limited options for txtt of COVID19 in this vulnerable population, additional exploration of remdesivir kinetics is needed to fully understand safety and efficacy. 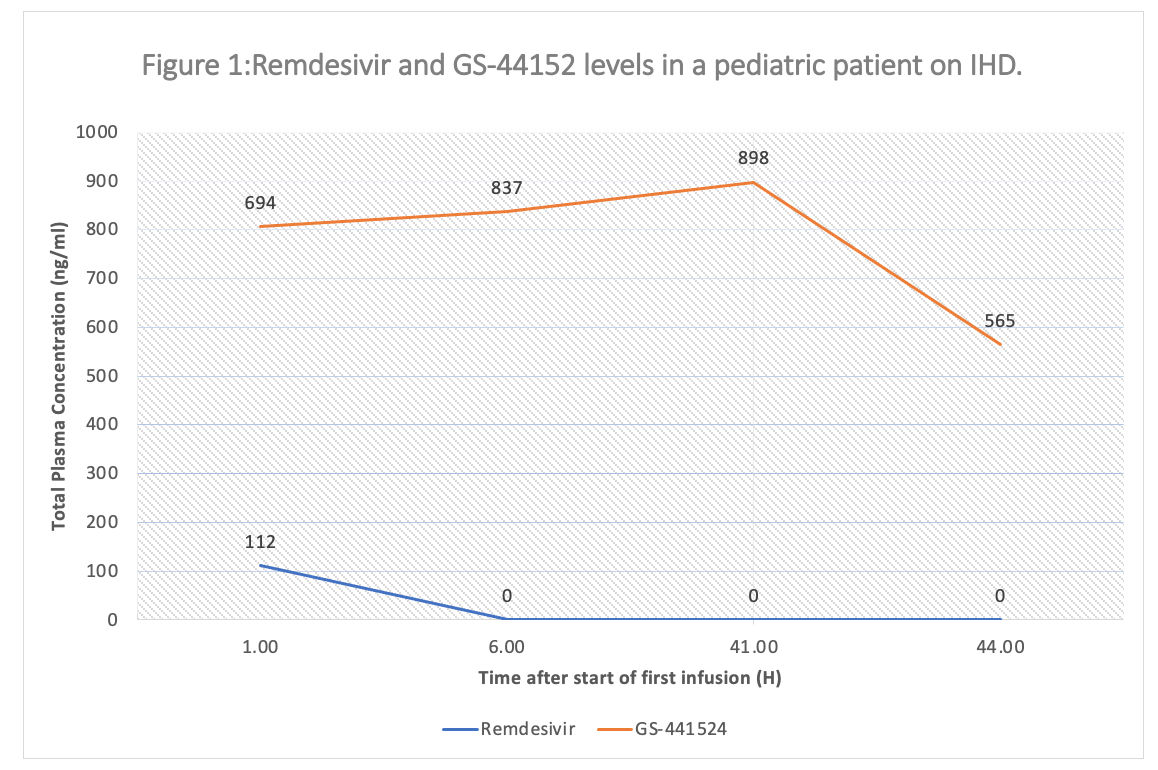