The Role of Complement in Primary Membranous Nephropathy

The Role of Complement in Primary Membranous Nephropathy

Primary membranous nephropathy (PMN) is the leading cause of nephrotic syndrome in adults and a common cause of end-stage kidney disease (ESKD). The Heymann’s nephritis rat model of PMN shows that proteinuria is complement-mediated. However, the pathogenetic role of complement in human PMN remains unclear.
Our preliminary data showed complement deposition on podocytes exposed to serum of PMN patients (from the Toronto GN Registry), leading to disruption of actin cytoskeleton (Figure 1a-b).
We aim to demonstrate that complement activation can have both structural and functional effects on podocytes.

Complement activation led to a significant rise in the intracellular calcium levels. Loss of mitochondrial membrane potential was also observed, together with intracellular ATP decrease, disruption of the actin cytoskeleton and impaired cell migration (Figure 1c-e).

Complement is active in PMN, leading to both structural and functional effects on podocytes. Further studies are needed to better understand the consequences on the podocyte energy machinery and the possibility of its reversibility by using complement inhibitors. Our research of such alternate therapy could lead to improvement in outcome in PMN where, despite current therapies, up to one third of patients develops ESKD. 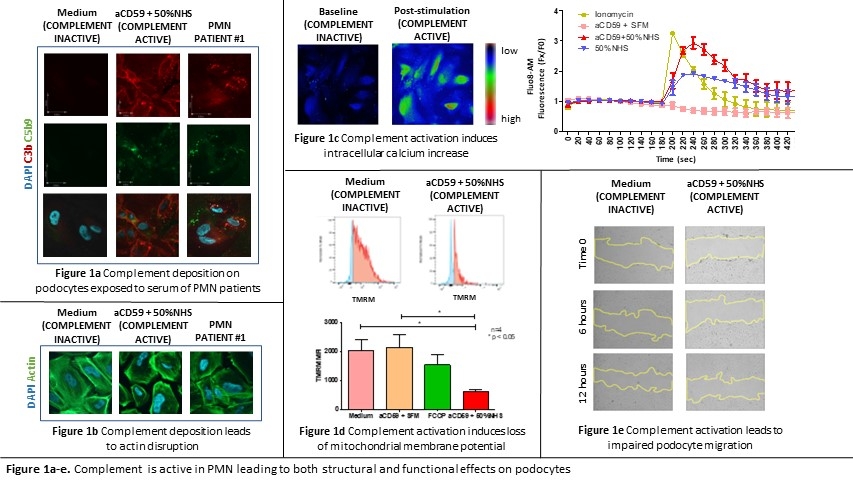