The USRDS reports that over 40% of deaths in patients with kidney failure on hemodialysis (HD) are due to cardiovascular disease (CVD), most of which are attributed to sudden cardiac death (CVD-SCD). These data are based on the Death Notification Form completed by dialysis clinics. The validity of USRDS reported cause of death has not been rigorously evaluated against the National Death Index (NDI) death certificate data, which provide epidemiological assessment of cause-specific mortality in the US.

Among 32,640 US adult incident HD patients, we identified 8,029 patients who died between 2003 and 2009 with cause of death not classified as hospice or dialysis withdrawal. We linked the NDI data to the dialysis cohort and compared USRDS vs. NDI cause of death using concordance and kappa (κ) statistics.

At the time of death, the patients' median age was 71 years and 44% were female. CVD accounted for 50% of deaths in the USRDS but only 37% in the NDI (Table). 32% of all deaths were classified as CVD-SCD by the USRDS compared to 17% by the NDI. Overall concordance of the USRDS with the NDI was low at 29%. The agreement between the USRDS and the NDI was poor (overall κ, 0.13), irrespective of the location of death (i.e., in-hospital vs. out-of-hospital) or the time since the last outpatient HD (i.e., <72 hours vs. >72 hours post HD). The poorest agreement (κ, 0.09) was observed among out-of-hospital deaths that occurred >72 hours after the last HD.

Significant discordance exists between cause of death reported by USRDS versus NDI. These findings may have major implications for the presumed CVD burden and risk factors associations with cause-specific mortality in the US HD population. 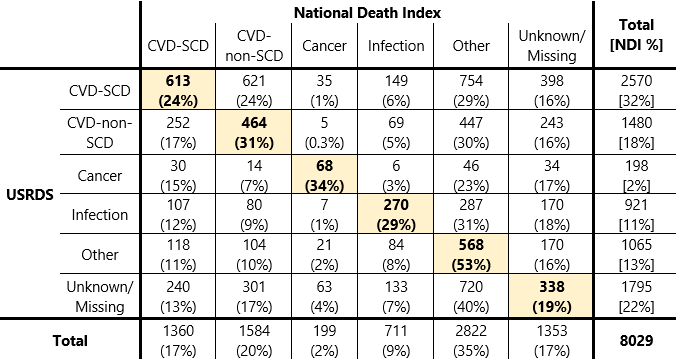