Variation in Hemoglobin Distribution in Patients With CKD: The International Network of CKD Cohorts (iNET-CKD)

Variation in Hemoglobin Distribution in Patients With CKD: The International Network of CKD Cohorts (iNET-CKD)

Hemoglobin (Hb) has a narrow target range in patients with CKD but little is known about geographical differences in Hb distribution. The aims of this global collaborative study were to compare the distribution of Hb across international CKD populations and evaluate predictors of Hb.

A total of 54,368 participants from 19 cohorts (median eGFR 17 to 49 mL/min) were included with broad geographic representation. Hb values varied substantially among the cohorts even within strata of eGFR and sex (Figure). Across the eGFR range, women had a lower Hb compared to men; however, these differences were smaller at lower eGFR (mean difference 13.2 g/L (95% CI 10.8-15.6) at eGFR of 60 mL/min versus 5.2 g/L (95% CI 3.5-7.0) at eGFR of 15 mL/min, p<0.001 for interaction). In a multivariable model, lower eGFR, female sex, older age, lower body mass index and diabetic kidney disease were independent predictors of a lower Hb value, but this only explained a minority of variance in Hb (median R2 of 21% [range 7 to 44%] across the cohorts).

There are substantial regional differences in Hb distribution among individuals with CKD. The majority of variance in Hb is unexplained by demographics, GFR or comorbidities. A better understanding of international variation in Hb, and the factors that contribute to it, could change the way Hb values are interpreted in CKD. 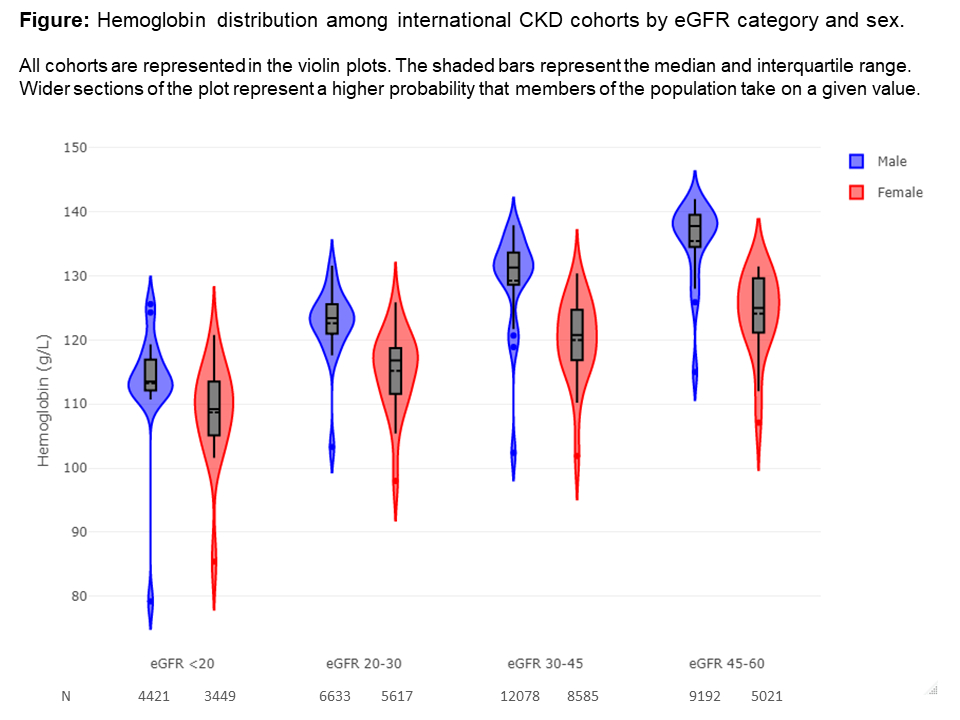