Hyponatremia Secondary to SIADH in a Patient With a Meningioma

Hyponatremia Secondary to SIADH in a Patient With a Meningioma

Severe hyponatremia, defined by a serum sodium less than 120 meq/L, is a serious and life-threatening electrolyte imbalance that may result in severe neurologic complications if not carefully managed. A common etiology is syndrome of inapprorpiate antidiuretic hormone secretion(SIADH) characterized by euvolemic hyponatremia in the setting of hypotonic serum and hyperosmolar urine. This is caused by increased antidiuretic hormone(ADH) from either the pituitary or ectopic source in the abscence of stimuli, and results in impaired water excretion due to the inability to suppress ADH. While tumors are often associated with SIADH, a rare association is with a meningioma, as presented in this case.

An 81 year old female with Hypertension not on a thiazide diuretic presented with weakness and fatigue. She was found to have severe symptomatic hyponatremia. Her initial serum sodium was 114 meq/L, serum osmolality was 257 mosm/kg, urine sodium was 49 mmol/L and urine osmolality was 433 mosm/kg. Further work up showed cortisol of 20.3 ug/dL and TSH of 1.57. Pateint was euvolemic on physical exam and was given 100 mL bolus of 3% saline on presentation. Over the course of her admission, serum sodium improved with fluid restriction alone. A CT brain showed a 1.9 cm extra-axial calcified mass along the left frontal dura consistent with a meningioma. Patient's sodium gradually improved without complications and she was discharged.

This case highlights a rare presentaion of severe hyponatremia from SIADH due to a meningioma. SIADH maybe from a medication, central nervous system disturbaces, or malignancies/tumors. In addition to treating hyponatremia, it is important for physicians to consider further workup of underlying malignancy or tumors in the absence of common causes of SIADH. 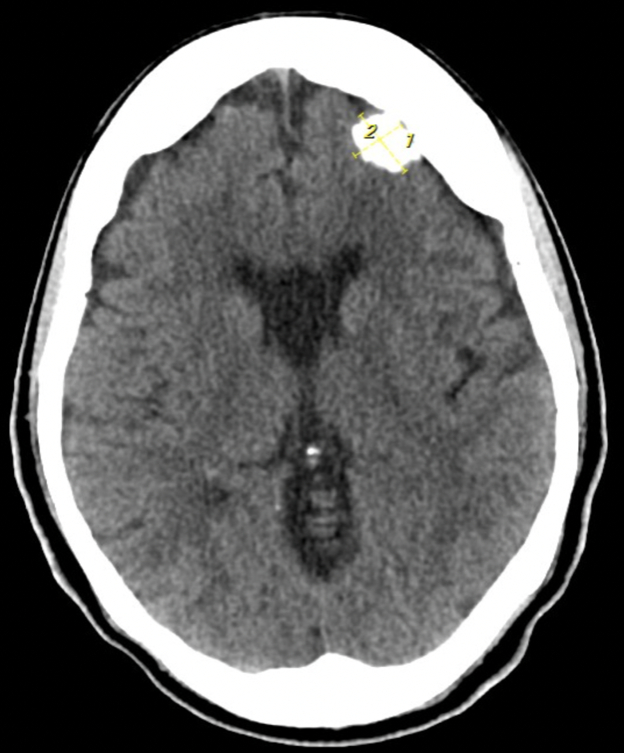