Diabetic nephropathy (DN) is the leading cause of end-stage renal disease around the world. Macrophages contribute to the development of renal injury and sclerosis. IL-34, expressed by tubular epithelial cells (TECs), promotes macrophage survival and proliferation by binding to the cFMS receptor and PTPRZ receptor on macrophages in SLE and AKI. The role of IL-34 in diabetic nephropathy and its effect on the quantification and polarization of macrophages have not been elucidated.

To validate the role of IL-34 in diabetes kidney disease, we established progressive diabetes nephropathy by unilateral nephrectomy combined with a 60% high-fat diet and STZ (120mg/kg) injection(Unx+60%HFD+STZ) based on WT and IL-34 KO mice respectively. Meanwhile, the sham operation group was used as the experimental control group. After 16 weeks of injection with STZ，we collected the kidney samples to evaluate the injury extent of the kidney, and flow cytometry was used to evaluate the quantification and polarization direction of macrophages.

In vivo, compared with the sham group, the mRNA level of IL-34 in kidney tissue was significantly up-regulated in WT-Unx+60%HFD+STZ. The result of HE staining and PAS staining showed that under the circumstance of unilateral nephrectomy model of high fat, IL-34 KO mice present less renal tissue pathological injure than WT mice. IL-34 KO-Unx+60%HFD+STZ mice had less infiltration of macrophages than WT - Unx+60%HFD+STZ renal tissue. 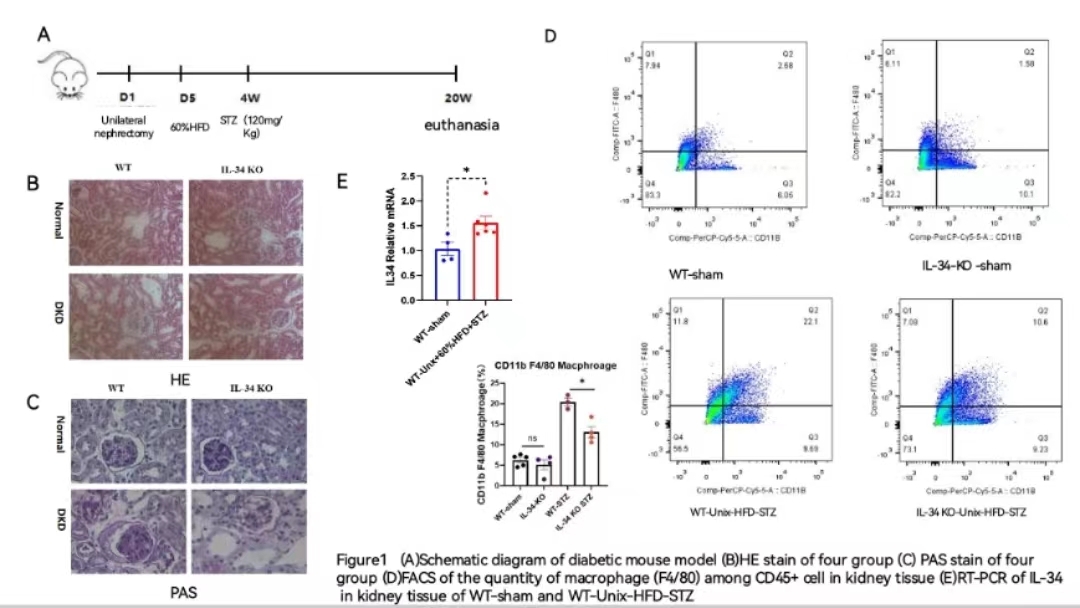