In living kidney transplantation, predicting the risk of end-stage kidney disease in the organ donors though crucial remains to be resolved. Thus, any useful biomarker to predict kidney outcome would be highly desirable to safeguard donors.

This retrospective study was conducted at Nagoya Daini Red Cross Hospital to confirm whether an increase in preserved kidney volume (PKV) was a predict marker of proteinuria. The ratio of body surface area (BSA) adjusted PKV before and 1 year after kidney donation was measured, and its association with proteinuria 3 years after the donation was analyzed.

A total of 119 kidney donors who met the Japanese donor guideline were enrolled. The mean age of 57.4 years old, 46.2 % were male. The mean values of the variables before kidney donation (baseline) were: BMI levels: 23.4 kg/m2, BSA adjusted PKV: 132.9 cm3/1.73m2, and estimated glomerular filtration rate (eGFRave): 82.9 ml/min/1.73m2. A positive correlation was noted between BSA adjusted PKV and eGFRave (r = 0.61, p < 0.001). The mean ratio increased by 19.5% (143.5 cm3/1.73m2) 1 year after donation, and the median urine protein was 0.04 g/gCre. Linear regression analyses showed that the ratio and BSA adjusted PKV before the donation were significantly associated with proteinuria 3 years after donation.(Figure 1)

The ratio and BSA adjusted PKV before donation is important factors for proteinuria after donation under the Japanese donor guidelines. Further studies would be needed to confirm whether these factors are associated with renal survival after donation. 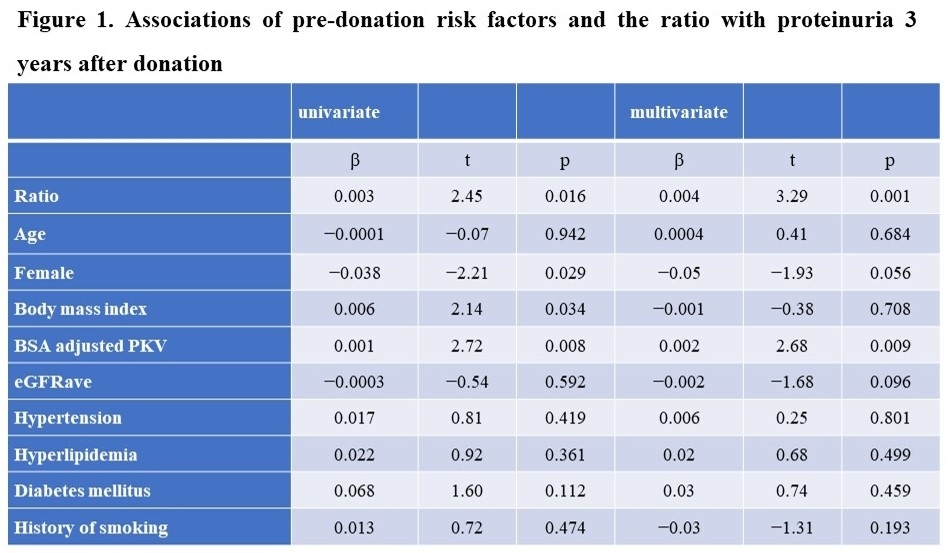