Checkpoint inhibitor therapy is associated with a variety of kidney complications, like acute interstitial nephritis with or without tubular necrosis, thrombotic microangiopathy and a variety of glomerulonephritis. Here, we describe a case with a rare pattern of injury, osmotic tubulopathy, after exposure to CPI, pembrolizumab.

48 y/o Caucasian female with triple negative breast cancer with liver metastasis received a regimen of carboplatin, paclitaxel and pembrolizumab over 16 weeks followed by lumpectomy and sentinel lymph node dissection. Subsequently, she presented with AKI. Her creatinine was 2.19 mg/dl on admission, worsening to 2.53 mg/dl and persisted despite stopping CPI treatment and starting empiric corticosteroids for suspected CPI toxicity, thus prompting kidney biopsy. Biopsy revealed marked vacuolization of proximal tubules, normal appearing glomeruli and no evidence of AIN. She did not receive medications usually implicated in toxic tubulopathy, nor was she exposed to any other nephrotoxins. Her kidney function started to improve reaching a nadir of 1.15 mg/dl 4 weeks after corticosteroids were initiated.

This case highlights the possible association of vacuolar tubular injury pattern associated with CPI therapy. Pembrolizumab contains L histidine, polysorbate 80 and sucrose. Of these, sucrose may be a predisposing factor to toxic tubulopathy. This has been described once before in literature by Sekulic et al, where it was male with lung cancer receiving nivolumab which contains small amount of mannitol as an active ingredient which was postulated as being the culprit. Learning points: Toxic tubulopathy of proximal tubules is a possible side effect of CPI therapy. Exclude other possible etiologies that can contribute to osmotic tubulopathy e.g., mannitol, CNI toxicity, amphotericin B exposure etc. Treatment remains supportive, possibly steroids and discontinuation of the offending agent until recovery of kidney function. 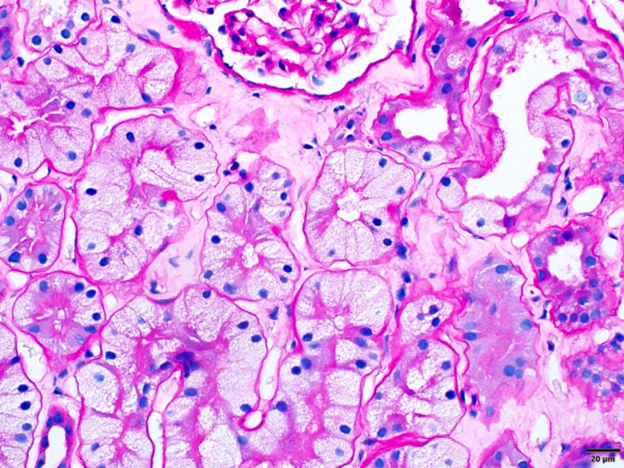