Misdiagnoses and the Impact on Disease Severity in Immunoglobulin A Nephropathy Patients: A Real-World Study

Misdiagnoses and the Impact on Disease Severity in Immunoglobulin A Nephropathy Patients: A Real-World Study

Physicians may suspect immunoglobulin A nephropathy (IgAN) based on patient history, a physical exam, and urine and blood tests, but the only way to truly diagnose IgAN is by kidney biopsy. Data reporting on misdiagnosis of IgAN are sparse. This study aimed to understand rates of misdiagnosis and the impact on disease severity in a real-world population.

Data were drawn from the Adelphi IgAN Disease Specific Programme (DSP™) conducted in 2021 in France, Germany, Italy, Spain, United Kingdom (EU5), USA, China, and Japan. The DSP was a real-world, point in time survey collecting data from nephrologists and their consulting patients, including demographics, frequency of misdiagnoses, diagnostic delay, reasons for the delay, and physician perceived disease severity. Descriptive analyses were performed.

In total, 321 physicians provided data for 1792 patients. The mean age of patients was 43.6 years, 1052 (59%) were male and 726 (44%) patients were white/Caucasian. Overall, 262 (82%) physicians reported managing patients who had been initially misdiagnosed which resulted in a delayed IgAN diagnosis. A higher proportion of misdiagnosed patients was reported in the EU5 and USA compared with, China and Japan (Figure 1). In total, 860 (56%) patients experienced a delay of >4 weeks from first consultation to receiving an IgAN diagnosis. In 54 (6%) of these, the reason for delay was diagnosis or suspicion of another condition. A higher proportion of patients who were misdiagnosed were moderate (57%) or severe (22%) when receiving an IgAN diagnosis than those who had not been misdiagnosed (52% moderate; 13% severe).

Our study showed that patients diagnosed earlier and without misdiagnosis were less severe at the time of their IgAN diagnosis. Prevalence of IgAN misdiagnosis is high, therefore further research is needed to understand the challenges faced by physicians when diagnosing this rare disease. 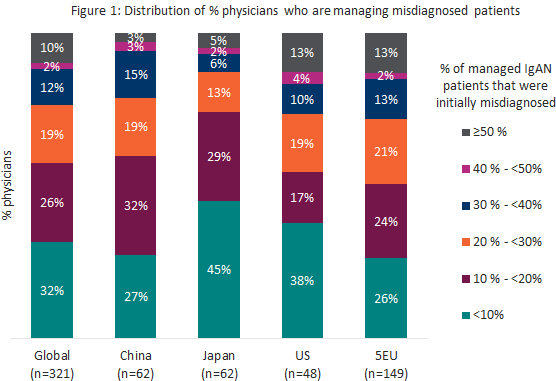