We aim to present a case of acute interstitial nephritis (AIN) secondary to nafcillin, which was diagnosed using gallium scintigraphy, and discuss its role in diagnosing AIN where a biopsy cannot be done.

An 88-year patient presented to our clinic with altered mental status. The patient was found to have bacteremia with methicillin-susceptible Staphylococcus aureus and for which she was treated with nafcillin. After 20 days of nafcillin treatment, the patient’s creatinine started to worsen and reached 2.5 mg/dL from a baseline of 0.9-1.0 mg/dL. Urine analysis showed pyuria, and interstitial nephritis from nafcillin was suspected. Nafcillin was stopped, and the patient was started on steroids. The patient was not a candidate for kidney biopsy due to multiple comorbidities and shock; hence we chose to do Gadolinium scintigraphy to diagnose AIN. Gadolinium 67-citrate intravenous 6.75-mCi scan showed diffuse activity in the kidneys bilaterally with at least grade 3 uptake, which was suggestive of AIN. After five days course of IV methylprednisone, creatinine improved to baseline.

Kidney biopsy is the gold standard for diagnosing acute interstitial nephritis. But in cases where kidney biopsy is not possible, we don’t have other alternate tests to confirm interstitial nephritis. Gallium 67 scintigraphy has been shown to be a very useful noninvasive tool to diagnose AIN; an uptake cutoff of 3 had a 75 % specificity, while an uptake cutoff of 1 had a 100% negative predictive value (1). Hence, in cases where kidney biopsy if not possible, gallium 67 scintigraphy can become a good noninvasive modality to diagnose AIN, as shown in our case. 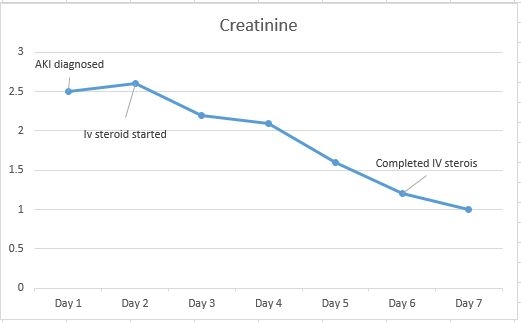