Cisplatin nephrotoxicity has been well described in the literature. However, renal salt wasting (RSW) is relatively uncommon. We present an interesting case of severe hyponatremia secondary to Cisplatin that mimicked SIADH but improved with administration of IV fluids.

A 39-year-old AA male with newly diagnosed small cell lung cancer was admitted for induction chemotherapy. Initial physical exam was unremarkable. Vital signs were normal, BP 120/77 mm Hg and HR 85. Laboratory: Na 132 mEq/l with normal creatinine at 0.6 mg/dl. Patient was given Cisplatin 80mg/m2 x1. Day 2, Na at 128 meq/l. Day 3, Na droped to 123 meq/l. Further workup: Serum osm 246 mOsm, TSH and cortisol WNL. MRI negative for brain metastases. Urine osmolarity at 726 mOsm with urine sodium of 222 mEq/l. Given malignancy concern, patient was treated as SIADH with fluid restriction. Na continued to drop, down to 117 meq/l (graph below). Upon rechecking vitals, patient was orthostatic and was complaining of dizziness. Given hypovolemia, RSW 2/2 cisplatin was suspected. Patient was started on NS infusion with slow and gradual improvement of his serum Na to normal. NS was eventually stopped, and patient was transitioned to salt tablets. Patient was not rechallenged with cisplatin.

Renal salt wasting is a rare side effect of Cisplatin that manifests as hypovolemic hyponatremia. Given the clinical and laboratory similarities, it is often misdiagnosed as SIADH. We want to shed light on the importance of recognizing this entity because restoration of intravascular volume is of the essence. 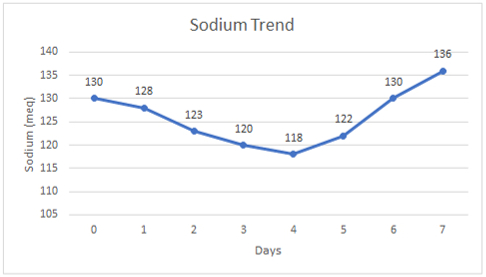