Severe hypertriglyceridemia (HTG) can result in significant acute and chronic conditions including pancreatitis and major cardiac adverse events. Early recognition and treatment is imperative to avoid complications. We report a case of severe hypertriglyceridemia incidentally discovered during therapeutic plasma exchange (TPE) for paraneoplastic syndrome with subsequent improvement of severe HTG with TPE.

A 61 year old man with past medical history of CAD presented with ataxia and vision changes and was found to have Hodgkins lymphoma and anti-Tr antibody associated paraneoplastic syndrome. He was started on chemotherapy with doxyrubicin, bleomycin, vinblasine, dacarbazine, and decadron. His paraneoplastic syndrome was treated with corticosteroids, intravenous immunoglobulin and TPE with subsequent improvement in gait and vision.

He developed a recurrence of neurologic symptoms and returned for a second course of TPE. His effluent was noted to be white and Triglyceride (TG) levels were obtained that notable for levels of 1503 mg/dl. After third session of TPE a 71.4% reduction in the serum TG (1368 mg/dl to 390 mg/dl) was observed. TPE was then continued for for a total of five sessions. At the completion of five sessions of TPE triglycerides had improved to 370 mg/dl.

The etiology of HTG was likely undiagnosed diabetes in the setting of high dose corticosteroids for paraneoplastic syndrome and chemotherapy. The patients Hemoglobin A1C was increased at 9.1%. He was started on empagliflozen and insulin with improvement in blood sugar. On his follow up visit his A1C had decreased to 6.7% and his TG improved to 437 mg/dl.

Severe HTG can have life threatening acute and chronic complications. Severe HTG was incidentally found due to workup of white effluent during TPE. It is reasonable to consider TPE as a therapy for severe hypertriglyceridemia pending evaluation and treatment to avoid complication from elevated triglycerides. 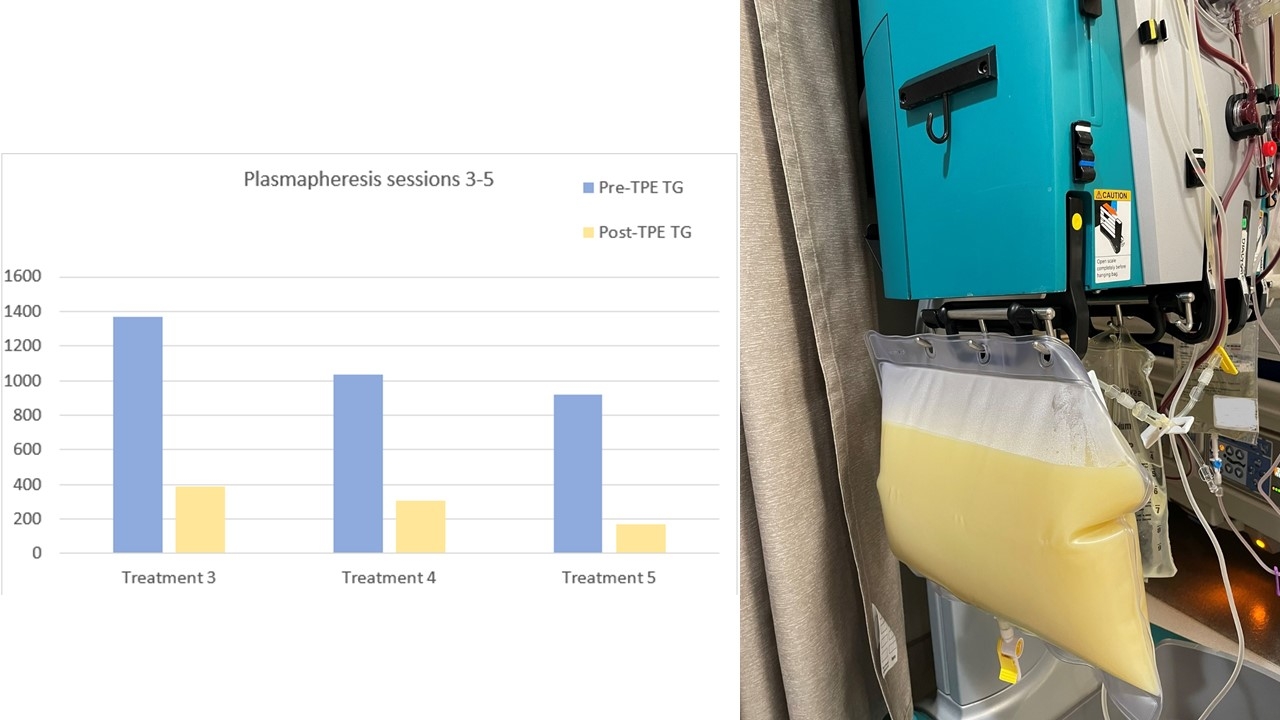