The percentage of incident dialysis patients electing PD as their initial dialysis modality increased over the last decade. Prior to 2010, PD rates were lower among patients of lower socioeconomic status, older age, urban residence, and Black and Hispanic race/ethnicity. We examined how the increased uptake of PD has changed these disparities.

We used USRDS data to generate PD usage rate among demographic groups of interest (race/ethnicity, neighborhood characteristics using the Social Deprivation Index (SDI), sex, age, rural/urban residence) for incident ESKD patients on dialysis in the US each year between 2010-2020. We analyzed the change and difference of change of PD rate among these groups using generalized linear regression.

The proportion of incident dialysis patients selecting PD approximately doubled over the period. Rates of PD usage among incident patients increased more among Asian patients relative to White patients (0.88% annual increase vs 0.58%) and more among White than among Black patients (0.43% per year). The proportion initiating dialysis using PD also increased faster in more advantaged neighborhoods relative to less advantaged ones (0.74% for SDI ≤33 vs. 0.43% for SDI ≥67). Younger patients experienced higher annual increases in PD usage (0.68% for 18-44 vs. 0.50% for age 75+), but older patients had the highest growth in PD use compared to their 2010 baseline (255% increase from 2010 to 2020 for 75+ vs. 178% for 18-44).

The increase in PD use resulted in worsened disparities among race groups and SDI groups, in an absolute sense. However, PD access for older patients grew substantially, perhaps as a result of improved payment incentives or increased provider comfort with PD in this population. Further studies of racial and economic disparities in PD access are indicated. 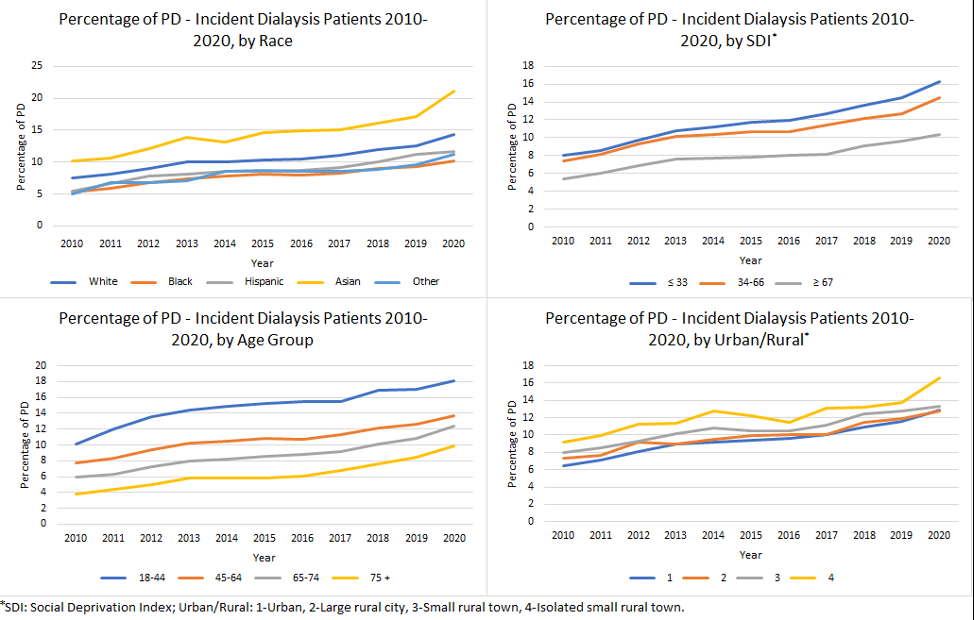 Trend of PD access (% of all incident dialysis patients among age, race, SDI, and rural/urban groups)