Gadolinium (Gd3+) chelates are a dynamic tool used for enhancing magnetic resonance imaging (MRI) examinations. Owing to the vital clinical diagnostic capabilities of Gd3+, hundreds of millions gadolinium-based contrast agent doses have been administered worldwide. Long-term tissue retention of gadolinium and nephrogenic systemic fibrosis are well correlated with exposures to these contrast agents. The kidney is the major organ of excretion for most gadolinium-based contrast agents. This study aimed at identifying cellular and molecular perturbations as a result of gadolinium chelate exposure in an in vitro model of mouse renal tubular epithelial cells.

Mouse renal tubular epithelial cells (MRTEpiCs) were cultured at density of 25,000 cells/cm2 and allowed to reach 70-80% confluence prior to exposure. For the identification of perturbatory effects, cells were exposed to physiological concentrations (0.002 mM-2 mM) of Omniscan or Dotarem for 24h. Intracellular reactive oxygen species was measured using a fluorescent (DCFH-DA) assay. Mitochondrial and lysosomal activity was monitored using fluorescent probes and confocal microscopy.

In this study we identify potential cellular and molecular modulators involved in the observed nephrotoxicity of gadolinium-based contrast agents. We demonstrate that gadolinium chelates induces mitochondrial dysfunction and increased lysosomal activity indicating an impact on organelle dynamics. These data can be used to enhance preclinical safety studies by improving assay sensitivities. 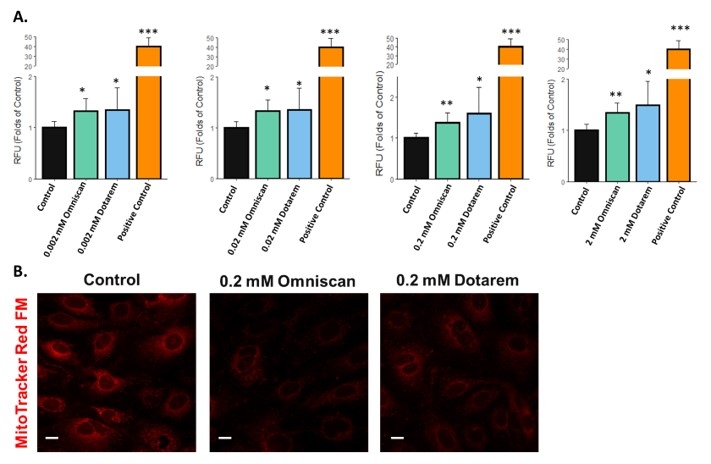