Antibody mediated rejection (AMR) remains one of the major causes of allograft failure and our understanding of this disease process is poor. Macrophages are thought to play an important role in the alloimmune reaction including AMR. We performed single cell RNAseq on biopsies from transplant patients to examine the effects of endothelial cell ligand expression on macrophages in AMR.

The 10X Genomics platform was used to make libraries which were sequenced to a depth of ~50k reads/cell. Gene-cell matrices were obtained from CellRanger and the downstream analysis were done using R and Seurat. The effect of ligand expression on target cells was analyzed using nichenetr. nichenetr predicts ligand-receptor interaction based on known target cell gene activity in response to ligand activity. This study had IRB approval.

15375 cells in total from 5 kidney transplant biopsy samples (3 AMR and 2 non-AMR) were included in the final integrated analysis using UMAP. All major kidney cell types were identified including macrophages. Endothelial cells (EC) were subclustered into 4 subgroups, IFNg_EC, PTC_EC, GEC_EC, and angiogenic_EC. The ligand with the greatest prediction score (0.958) for target cell (macrophage) gene activity in the rejection niche was CCL23 acting through CCR1 receptor. CCL23 was differentially expressed in IFNg_EC cells in AMR (compared to other ECs and non-rejecting ECs). 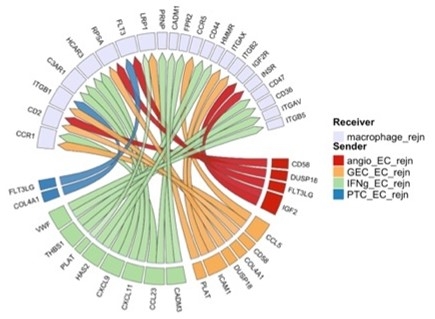