Potential living donors (PLD) may present for evaluation but not donate due to modifiable factors that could be intervened upon. From a longitudinal cohort study of 5 transplant centers, we examined how many PLDs of different races/ethnicities actually donated, how many were not ruled out who might still donate, and whether any modifiable factors were predictive of actual living donation (LD).

From 2017-2020, we surveyed 2184 PLDs about their demographic characteristics, their educational preparedness, LD readiness, and anxiety prior to evaluation. Using EMR review, we followed 1241 PLDs for up to 12 months who were not ruled out to determine whether they donated a kidney. We used multivariable logistic regression models to identify characteristics associated with donating with variable selection conducted using the least absolute shrinkage and LASSO methods.

Interventions focused on increasing living donors’ readiness and preparedness may reduce drop-out and increase the number of PLDs converting to actual LD. 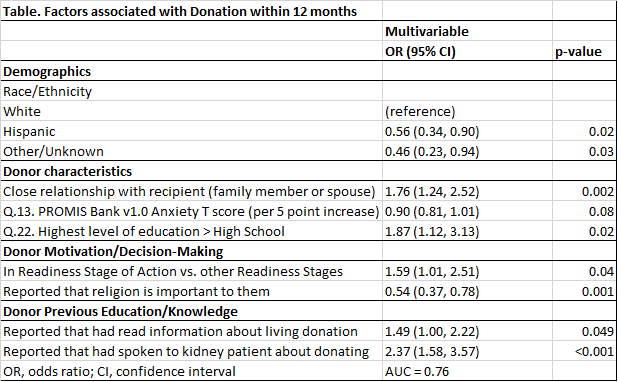