Vertically aligned carbon nanotubes (CNTs) forests were synthesized via chemical vapor deposition with precise diameter control via catalyst engineering and the space between was filled with paralyene. A microporous silicon support was used as a backing plate and the membranes mounted into a custom-built filtration cell. Hydraulic permeability was assessed via gravimetric flow rates at different transmembrane pressures. The transport of fluorescently labeled polydisperse Ficoll, either in phosphate-buffered saline (PBS) or bovine blood plasma was used to evaluate the size-selectivity. Ficoll concentrations were analyzed using size-exclusion chromatography.

The synthesized CNT membranes membrane exhibited a cut-off ~6nm for Ficoll in PBS as well as bovine blood plasma. We measured a hydraulic permeability ~102.3 ml h-1 m-2 mm Hg-1 in comparison to ~30 ml h-1 m-2 mm Hg-1 reported in the literature for conventional high flux dialyzers. The CNT membranes allow for near complete passage of ~2 nm Ficoll molecules (Figure), which is similar to the approximate size of hemodialysis relevant small/middle molecules, e.g. b2 microglobulin, while maintain clinically acceptable levels of Albumin loss. 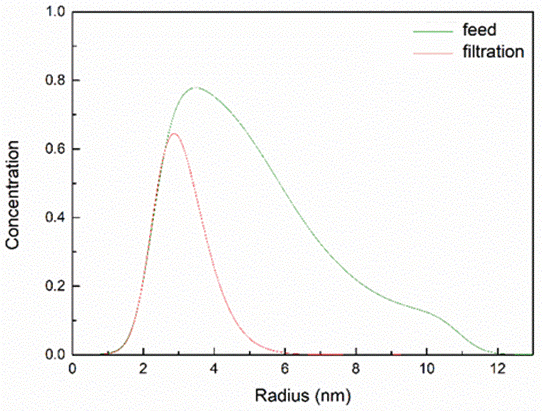