A Case of Isolated Banff 2b Arteriopathy

A Case of Isolated Banff 2b Arteriopathy

Carefully balancing the risk of malignancy with the risk of allograft rejection underscores the importance of treating immunosuppression (IS) as both a science and an art. This case highlight a rare finding of isolated Banff2b TCMR that developed 28 years after initial transplantation.

This is a 65 y/o male with a past medical history of LDRK transplant 28 yrs ago (ESRD 2/2 IgAN), lymphoma s/p ABVD and invasive skin cncer who presented to the office with progressively worsening creatinine over the past month.

The patient has been managed with cyclosporine and low dose prednisone since his initial transplant. He was diagnosed with an invasive microcystic adnexal carcinoma of the skin about 25 years after kidney transplant. He underwent resection of the carcinoma soon after diagnosis. About one year after resection, the invasive carcinoma recurred. He became blind in one eye as a consequence of his worsening malignancy. Ultimately, the decision was made to wean off of cyclosporine and start on sirolimus while low dose prednisone was continued. He was started on carboplatin and paclitaxel shortly after switching his IS medications. One month afterwards, he presented to his Nephrologist’s office with a progressive increase in his creatinine and concern for rejection. A kidney biopsy was performed.

The biopsy showed minimal interstitial inflammation with one artery showing marked intimal expansion with both fibrosis and an active appearing lymphocytic infiltrate. The chronic inflammatory infiltrate also involved the media and adjacent cortex.

Isolated Banff 2b arteritis is a rare phenomenon. In this case, acute rejection developed rapidly after years of stable IS therapy once cyclosporine was changed to sirolimus. The findings were favored to represent active endarteritis superimposed on chronic transplant arteriopathy. He was then restarted on sirolimus and higher dose of steroids and completed four treatments of local graft radiation with interval improvement of his creatinine. 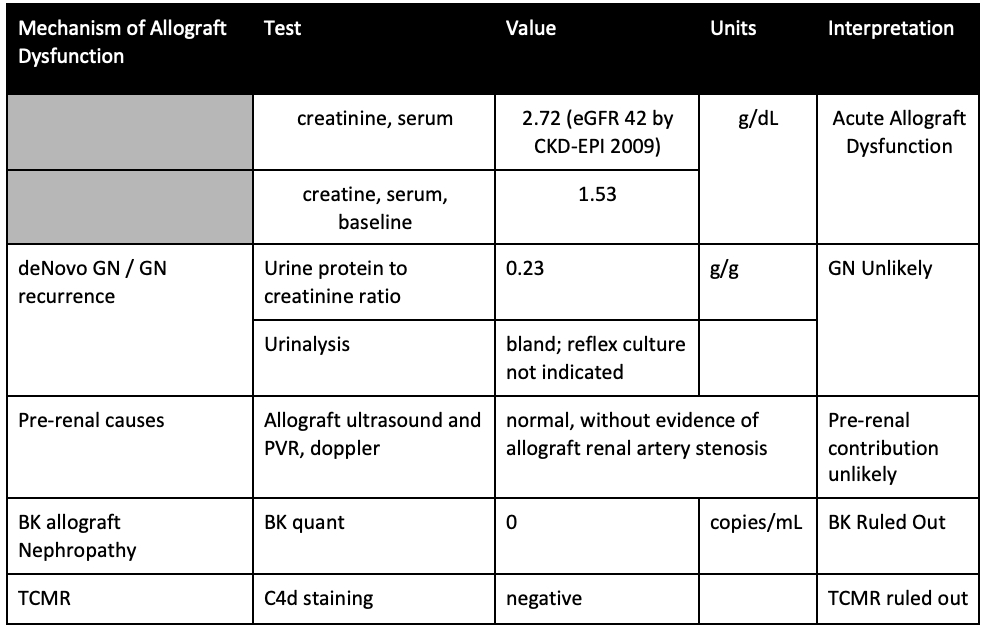