There is limited published data on the outcomes in those with AKI after extracorporeal membrane oxygenation (ECMO) cannulation.

We performed a single center retrospective study of patients who underwent ECMO cannulation between 1/2015 and 7/2017. We excluded patients with pre-existing End Stage Renal Disease (ESRD) and those who died within 24 hours of ECMO initiation. AKI was defined by the KDIGO criteria within 7 days of ECMO cannulation. Survival analyses were performed using the log-rank test.

We found 117 patients but excluded 23(18 of whom died within 24 hours of ECMO). Of the remaining 94 patients 76(81%) received veno-arterial (VA-ECMO) and 18 received Veno-venous (VV-ECMO). Of the 94 patients, 13(13.8%) did not experience AKI during their entire hospital stay. AKI prior to ECMO cannulation occurred in 42(44%) patients and 39(41%) patients only developed AKI after ECMO. Of those with AKI(n=81), 16 developed Stage 2 AKI, 51 developed Stage 3 AKI of which 47(50%) received renal replacement therapy (RRT). AKI rates were not different across VA and VV ECMO(p=0.15). Patients with any AKI were more likely to die at 30 and 90 days compared to those without any AKI(p<0.01 for both). Figure A demonstrates no difference in 90 day mortality between those with pre-ECMO AKI compared to those with post-ECMO AKI (p=0.64).

Those who did receive RRT(n=47) did not have significantly different pHs, hemoglobin or other pre-ECMO co-morbidities (CKD, CHF, Diabetes) compared to those without RRT(n=47). In a multivariate model the presence of pre-ECMO vasopressors was an independent predictor for the need for RRT(OR(95%CI) 4.59(1.10-19.2)p=0.037). Patients requiring RRT had increased 90-day mortality compared to those without RRT(p<0.003) Figure B.

AKI is common in the setting of ECMO. While there was no difference in mortality in those with pre versus post ECMO AKI, AKI requiring RRT significantly decreases patient survival at 90 days. 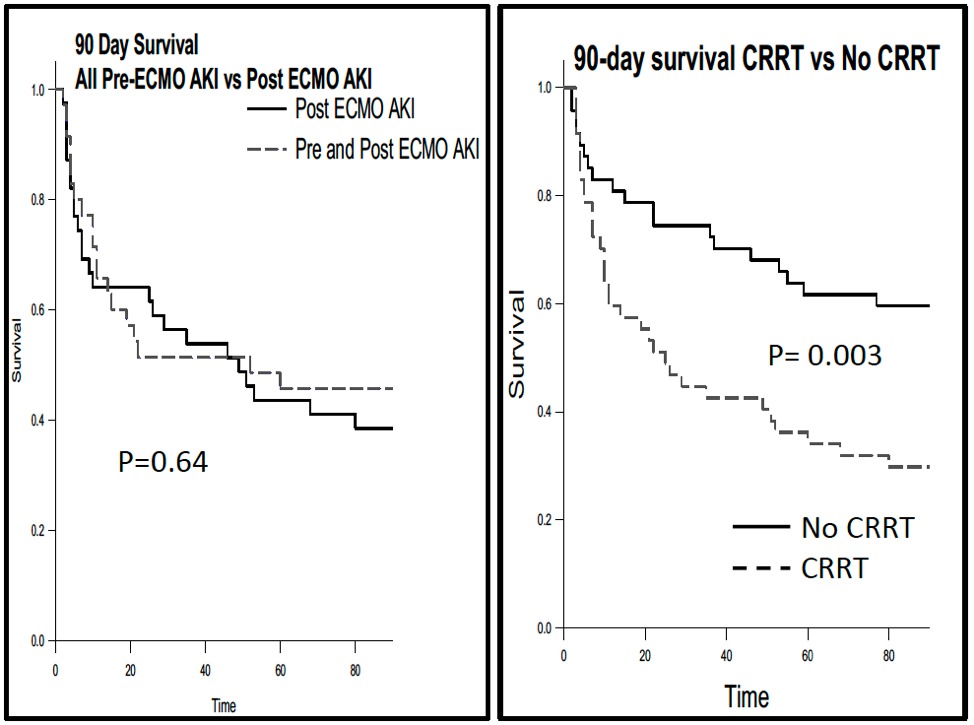