We studied 653 children from 4C study, 341 children from ESCAPE trial, and 633 children from CKiD study with an eGFR <60 mL/min/1.73 m2. The primary predictors were the 4-variable (age, sex, bedside eGFR, albumin-to-creatinine ratio) NA and NNA KFRE score which provides estimates of the risk of ESRD over a 2- and 5-year horizon. C-statistics were used to compare discrimination of the risk for ESRD by the KFRE, and this predicted risk of ESRD was compared to observed failure rates.

Median follow-up time was 2.8 years in 4C, 4.7 years in ESCAPE, and 3.8 years in CKiD. The NA and NNA 4-variable KFRE strongly discriminated risk of ESRD in children outside the US, with a C-statistic of 0.82 and 0.79 in 4C and 0.90 and 0.87 in ESCAPE over a 2- and 5-year horizon, respectively. The predicted risk closely matched the observed ESRD rates in CKD stage 3, but over-predicted ESRD risk in CKD stage 4-5 across all cohorts (Figure 1). After we re-calibrated the equation, performance of the KFRE in advanced CKD improved (Figure 2). 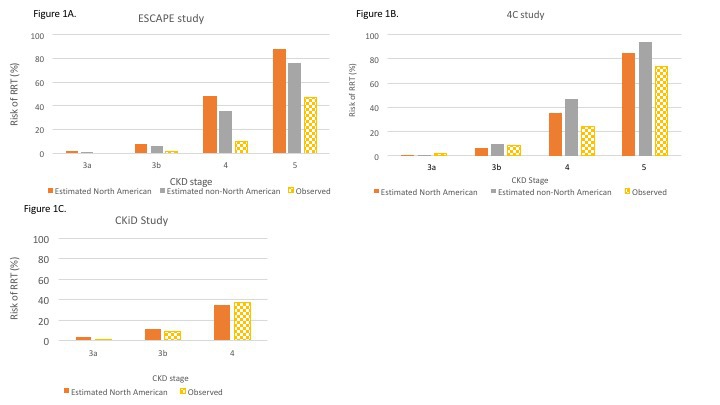 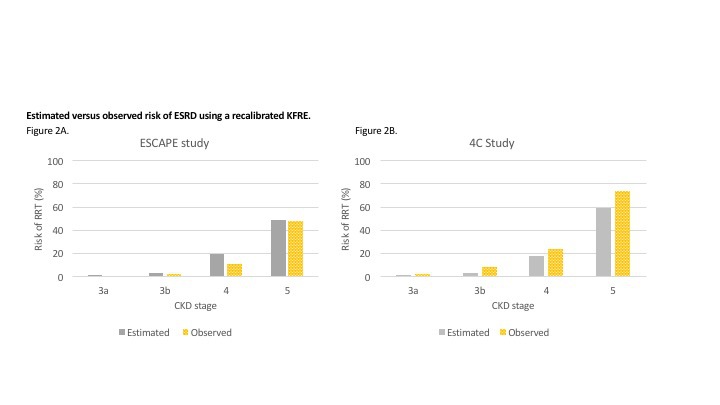