Cause of Death in Children and Young Adults Treated with Dialysis: 1990-2015

Cause of Death in Children and Young Adults Treated with Dialysis: 1990-2015

Survival of children on dialysis has improved over the last two decades. However, few studies have examined whether there have been differences in attributed causes of death (cardiovascular, infectious, or malignancy-related) over time in children or young adults treated with dialysis.

We included patients ages 0-25 years who started dialysis between 1990-2010 followed through December 31, 2015 in the United States Renal Data System. We examined overall mortality and cause-specific mortality (categorized as cardiovascular (CV), infectious, or malignancy-related) by calendar year. We used Cox models to examine differences in the risk of all-cause and cause-specific mortality over time (using 1995 as a reference), accounting for age at dialysis initiation, sex, race, median neighborhood income, cause of ESRD, and insurance type. Follow-up was censored at receipt of a first kidney transplant.

We included a total of 41,339 individuals who started dialysis between 1990-2010, of whom 6344 died during 3.5 years of follow-up. Mean age was 16 yrs, 56% were male. 54% of deaths were secondary to CV causes, 14% infectious causes, and 2% were secondary to malignancy. In adjusted analysis, risk of overall death appeared to increase initially up to 2006, then decreased thereafter (Figure, p<0.001 for non-linearity). Risk of CV-related death also increased initially, but then declined after 2006 (p<0.001 for non-linearity). Risk of infectious-related death steadily decreased over time by 4%/yr (p<0.001, Figure). In contrast, risk of malignancy-related death increased over time by 4%/yr, although this trend did not achieve statistical significance (p=0.08).

Survival in a prevalent cohort of children and young adults receiving dialysis appears to be relatively stable over the last two decades, but differed by cause of death. Risk of infectious-related death has steadily improved, whereas risk of malignancy-related death has steadily increased over time. Further studies are needed to understand the reasons for these findings. 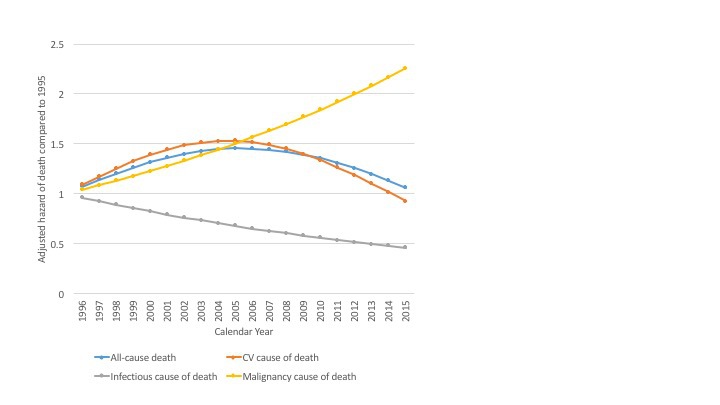