In the general population the relationship between BMI and mortality is U-shaped, while in the hemodialysis (CKD 5D) population lower risk at higher BMI was observed. Pathophysiologic explanations exist, but disease may also act as a statistical collider creating a “selection bias by death”. We studied the relationship across CKD stages and in various subpopulations.

We studied healthy subjects, CKD patients at various stages (NHANES 1999 to 2010), and CKD5D patients dialyzing in Renal Research Institute (RRI) clinics. We constructed Cox proportional hazard models and depicted hazard ratios over a wide BMI range using spline functions and evaluated differences between subsets stratified by age (</>= 55 years), gender, race, and ethnicity. We also constructed polynomial models to test for an interaction between CKD stage and BMI in the Cox models. Akaike Information Criterion (AIC) was computed to determine the most accurate model.

Our data show a consistent U-shaped relationship between BMI and all-cause mortality in the general population, but an “obesity paradox” in CKD5D. While the biological reasons are elusive, the consistency of the observation across all analyses suggests a pathophysiological relationship in concert with CKD acting as a statistical collider. 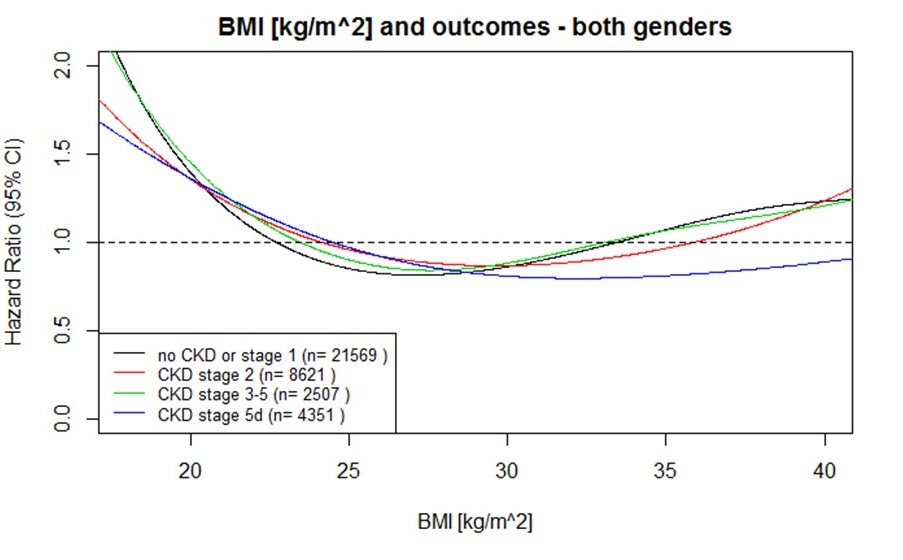 Spline function of hazard ratio of all-cause mortality over a 3-year follow-up period as a function of body mass index (BMI).