Uromodulin is released by renal tubular cells into the serum (sUMOD) and urine. Lower urine UMOD has been linked to mortality and cardiovascular disease but much less is known about sUMOD. We evaluated the association of sUMOD with those outcomes in community-dwelling older adults.

We measured sUMOD in a random subcohort of 933 participants enrolled in the Cardiovascular Health Study. The association of sUMOD with all-cause mortality, incident heart failure (HF) and incident CVD (myocardial infarction, stroke and mortality due to coronary disease or stroke) were evaluated using multivariable Cox regression, adjusting for study participants’ demographics, estimated glomerular filtration rate (eGFR), albuminuria and CVD risk factors. Generalized additive models with splines were used to address the functional form of sUMOD with outcomes. Due to non-linear associations of sUMOD with all outcomes, 2.5% of the values on either end of the sUMOD distribution were excluded from the analyses, limiting the range of sUMOD to 34.3 - 267.1 ng/ml.

Low sUMOD is independently associated with mortality and CVD in the elderly. 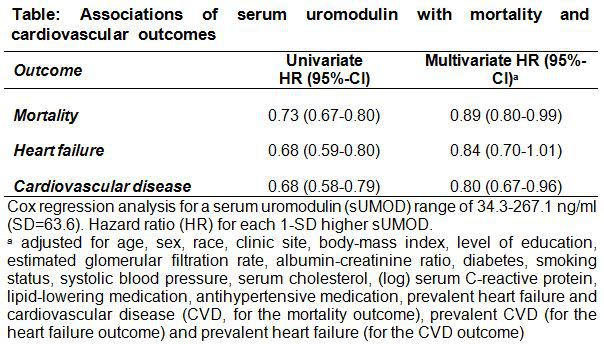