Diabetic kidney disease (DKD) is most important target of intervention for improvement of outcome of chronic kidney disease (CKD). Recent prevalence and characteristic of CKD including DKD among a Japanese general population are not fully elucidated.

Subjects were residents from 27 of the 47 prefectures in Japan who enrolled in national health insurance and participated in annual health check program including a CKD screening in 2015 (n=1,059,888; age, 40-74 years; male, 42.8%; diabetics [HbA1c≥6.5% or undergoing pharmacotherapy for diabetes], 12.3%). CKD was defined as estimated glomerular filtration rate (eGFR) <60 mL/min/1.73 m2 or dipstick albuminuria ≥1+. CKD comorbid with diabetics was regarded as DKD．Cross-sectional analysis of the distribution of GFR (G) and albuminuria (A) categories by sex/age group among participants were performed. (A1: <1+, A2: 1+, A3: ≥2+ by dipstick)

The distribution of each G and A categories are summarized in Table. Thus, in this screened population, the crude prevalence of CKD was 19.7%, and those with reduced renal function classified between G3-5 accounted for 16.6%. Among diabetics, the crude prevalence of CKD was 27.7% and was higher than in non-diabetics across all age groups with tendency that became noteworthy in younger population. (Figure 1) As for the distribution of G and A category among DKD, G3a and A1 were most prevalent in the age groups ≥65 years. (Figure 2)

Recent prevalence of G3-5 might slightly increase compared with similar cross-sectional analysis in 2008 (Iseki K, et al. Clin Exp Nephrol 16: 244-249, 2012). The overwhelming majority of aged DKD remain mild to moderate renal dysfunction without albuminuria. Therefore, it is important for screened DKD that strategic allocation of health resources according to age and individual risk would be established. 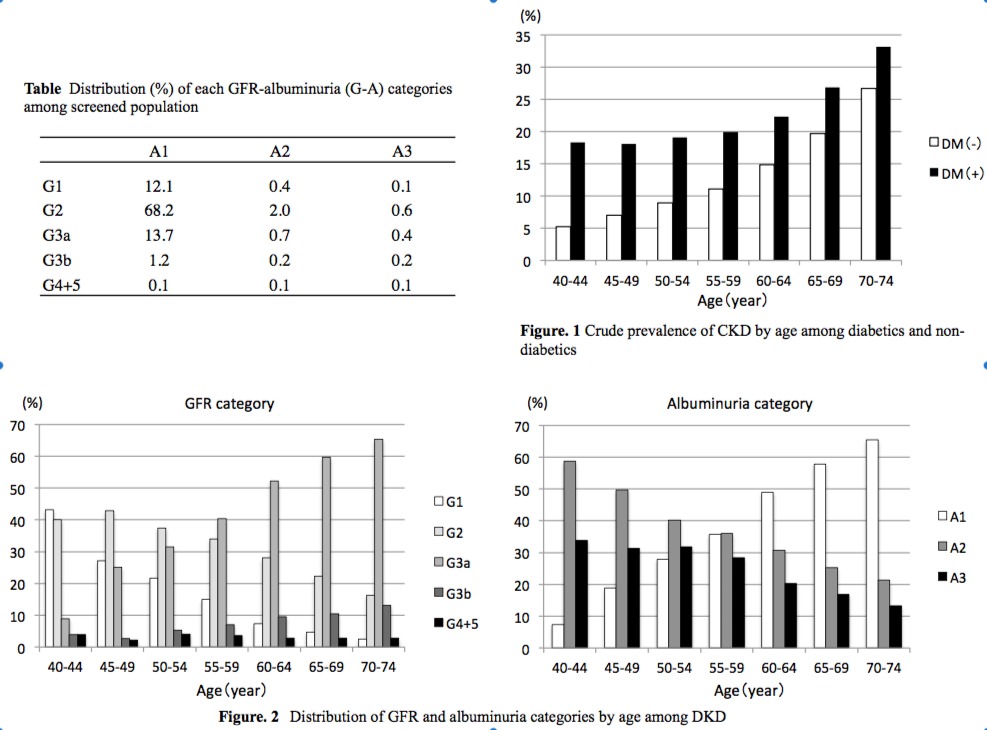