Placental Passage of Eculizumab and Complement Blockade in a Newborn

Placental Passage of Eculizumab and Complement Blockade in a Newborn

Atypical hemolytic uremic syndrome (aHUS) and paroxysmal nocturnal hemoglobinuria (PNH) are rare complement mediated disorders, often affecting women of childbearing age. Because of severe maternal and fetal morbidity and mortality, pregnancy used to be discouraged. The introduction of the complement inhibitor eculizumab has contributed to successful pregnancies. Eculizumab can cross the placenta, and thus may inhibit the complement system of the newborn.

A 30 year-old mother, known with aHUS and without treatment, presented at 8 weeks of gestation, with a rise in serum creatinine (from 100 µmol/L to 219 µmol/L), progressive proteinuria and evidence of thrombotic microangiopathy (thrombocytes 91x109/L, undetectable haptoglobin and LDH 309 U/L). Treatment with eculizumab was started (900 mg weekly for four weeks, followed by 1200 mg biweekly), resulting in normalization of hematological parameters and improvement in renal function. At 36+1 weeks, after a spontaneous vaginal delivery, a healthy infant of 2010 gram was born. The mother had received her regular eculizumab dose 1 day before delivery. The eculizumab trough level was 262 µg/ml. Eculizumab was detectable in the cord blood of the newborn: free eculizumab level was 69 µg/ml. Evaluation of the complement cascade revealed complete blockade (Figure). Recovery was slow, and lasted > 3 weeks. The newborn was prophylactically treated with amoxicillin until normalization of the complement.

Passage of eculizumab resulted in a therapeutic eculizumab level and full complement blockade in the newborn. During follow-up the alternative complement pathway remained blocked for several weeks while eculizumab levels decreased. This may be the result of physiologically low neonatal complement levels. Based on our observation we recommend assessment of drug levels and complement activity in newborns from eculizumab-treated mothers. Prophylactic treatment of newborns with antibiotics should be considered. 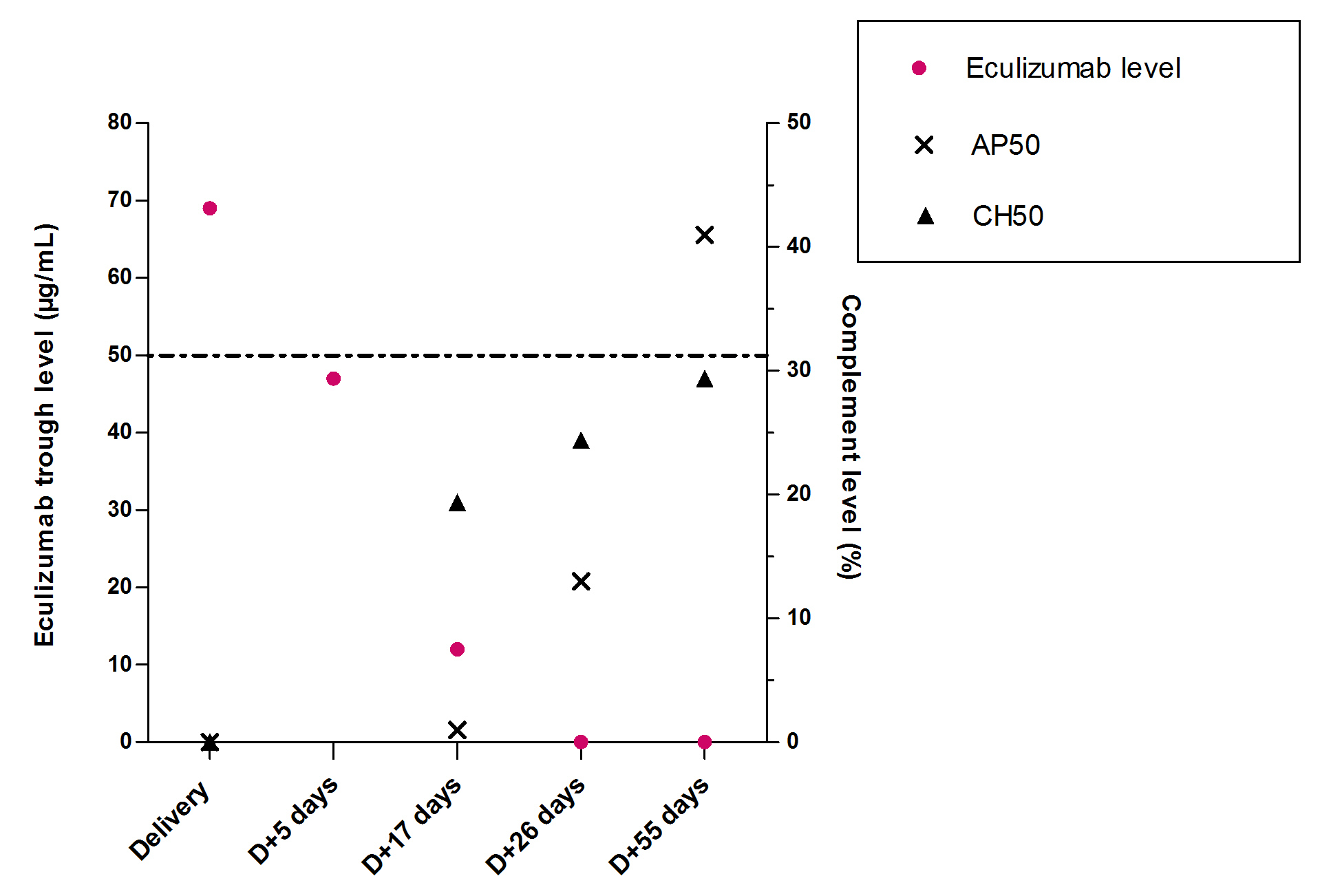